My list of loves and loathes of the week

For those of you who know me, you know that I love everything celebrity, fashion and pop culture. And for those of you who know me really well, you know how much I love to celebrate the style, mock the mental breakdowns (I’m talking about you, Amanda Bynes) and marvel at all of the talent. I live, breathe and love the movie premieres, reality (and quality) television and the superstars of the music industry. This list is a compilation of the most captivating Hollywood stories of the week and the things I felt most compelled to loathe or love. I hope you agree. You should.

Unless you were living under a rock you’ve probably seen Kim Kardashian’s naked spread in Paper Magazine. She graces, if you could call it that, the cover showing her famous booty off with a string of chunky pearls around her neck. Her waist and arms are clearly photoshopped and with her body covered in oil, she looks like a seemingly plastic Barbie doll.

I am actually a pretty big Kardashian fan — their show is one of my guilty pleasures, and I do follow a few of the “K” sisters on Instagram. But my faith in the family was essentially destroyed after these photos. Kim reportedly has a net worth of $65 million with her iPhone app and made $43 million in just three months.

She needs neither the money from Paper Magazine nor the publicity. She has 21 million followers on Instagram and 24.5 million followers on Twitter. This leads me to question why she chose to “bear it all.” Her financial success is evident and her relevance in the world is even more obvious. It seems after this spread (ha) she has caused an influx of anti-Kardashian sentiment, and it looks like it is here to stay.

To me, Kim got what she wanted. She broke the Internet. But at what cost? People already see her as famous for doing nothing, or famous because she made a sex tape, had a 72-day marriage and is good for nothing else. With this shoot, she only perpetuated that identity. Also, #tbt to the time she cried on an episode of Keeping Up With The Kardashians about a naked spread she did for W Magazine. And to be honest, she should be crying about this spread — simply not good and not smart. My post won’t affect her, and neither will whatever anyone else has to say. Love yah Kim, but this was loathe-worthy.

Unlike the rest of the young girls in this country, I am not the biggest Taylor Swift fan. I sometimes like her music but I find her to be whiny and irritating at times. No one can deny her model looks and fashion choices. But this week Taylor made the news for her very public battle against Spotify. Taylor went on a whole anti-piracy rant in an op-ed in The Wall Street Journal this summer and more recently, pulled her entire collection of albums from the music sharing website. Swift told Time Magazine in an interview that she did not like the way it felt having her music on the site. In an interview with Yahoo music, she reiterated that sentiment and said: “I’m not willing to contribute my life’s work to an experiment that I don’t feel fairly compensates the writers, producers, artists and creators of this music. And I just don't agree with perpetuating the perception that music has no value and should be free.” So, essentially Swift’s qualms with the music-sharing website focus on her desire for more money. Spotify CEO, Daniel Ek, fired back at Swift in a blog post on the music website saying she could have earned a reported $6 million if her new album was shared on the site, and that artists are indeed paid for having their music streamed.

Cue loathe number 1. Taylor Swift does not need the money she would have earned from Spotify, she has 4 houses and Forbes estimates her net worth to be around $200 million. Pulling her entire catalog of music seems completely ridiculous. Does she really feel like she needs more money? To me, she doesn't. Cue annoyance number 2. Why pull your music from a hugely popular music-sharing website? She should be happy fans want to listen to her music, and she should be excited to share it with the world, especially if she is calling her latest album her best yet. Why would she not want more exposure?

Next T.Swift fight of the week centers on her feud with Katy Perry and Diplo. Lorde then joined the battlefield and now the rest of the world has first-row seats. On her new album, 1989, Swift has a song called “Bad Blood,” which according to The Washington Post is a song targeting Perry. Swift also spilled the beans to Rolling Stone about the song, and essentially led all signs to point to Perry. According to The Washington Post and Rolling Stone, the Perry/Swift feud began when Perry tried to steal Swift’s dancers from a stadium tour in addition to some other petty drama. I’m convinced the song is about the drama surrounding how they both dated John Mayer, but who knows? Perry’s current boyfriend, DJ/music producer Diplo made fun of Swift on Twitter and ignited a huge Twitterstorm. Swift’s BFF, 18-year-old freak of an Australian sensation Lorde, came to her rescue and fought back against Diplo, all on the great 140-character platform, Twitter. Talk about a cat fight. (Get it? Cause Taylor Swift likes cats. OK sorry, bad joke).

"Someone should make a kickstarter to get taylor swift a booty" So in this situation I just have to give basically the whole world a love because this fight is absolutely amazing. I love it. I am all over it and I have to say I’m Team Katy Perry. Perry is effortlessly cool and a cuter half to John Mayer than Swift ever was. I do not condone Diplo’s “body shaming” many Swift fans, Swifters for short, accused him of doing. Either way, the world won and this was a total lovefest from me because anytime celebrities fight, it is nothing less than great.

Also quick note: Swift's “Blank Space” music video came out this week and props to her. Her “boyfriend” in the video is gorgeous and is a super in-demand male model. He has graced campaigns for Giorgio Armani, Versace, H&M, Zara and Hugo Boss and will only continue his fame after starring in her video. So for that I have to give Tay a “love.”

The Hunger Games, Mockingjay, as some super Katniss-loving fans would correct me, premieres this weekend, and I couldn’t be more excited. Because with the premiere of The Hunger Games comes the onslaught of Jennifer Lawrence GIFs, funny moments, talk show appearances and amazing red carpet fashion. Oh, and Liam Hemsworth and Josh Hutcherson. I think it is safe to say everyone loves Jennifer Lawrence – she says the things we are all thinking and seems like an average person even though she is a mega-celebrity. We can also never forget the time she fell on the red-carpet and while walking up to receive her Academy Award. 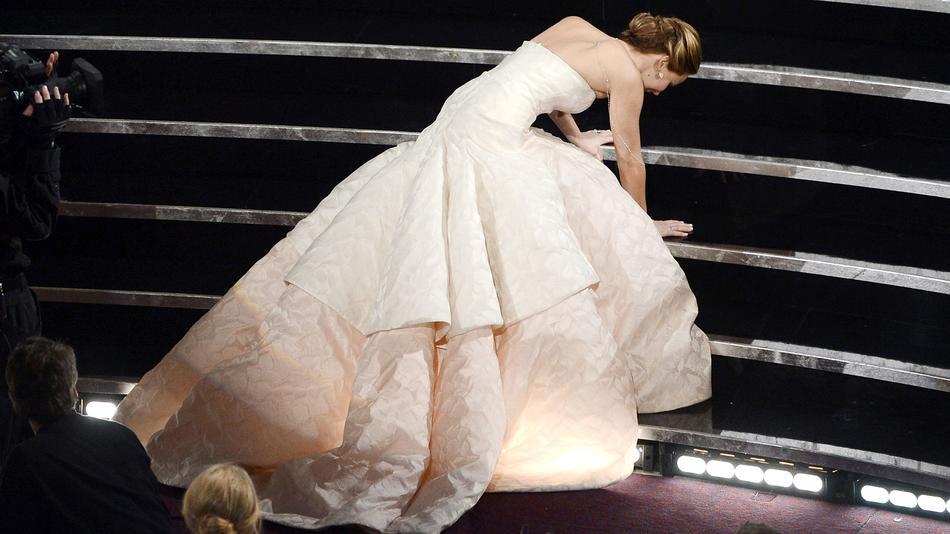 She has YouTube videos devoted to her “funny moments,” and the GIFs of her on Tumblr are limitless. If it’s not evident, I have a total girl crush on J-Law, and I’m so excited for her new movie. Essentially, she can do no wrong and along with her two Hunger Games sidekicks, the movie is set up to be a major box office success. Therefore, J-Law, J-Hutch, L-Hems and the rest of team Hunger Games gets a love from me this week.

This week, Calvin Klein made waves in the modeling and fashion world by debuting a new campaign with a size-10 model. Calvin Klein, the ultra-successful perfume, clothing and underwear brand, has always been recognized for its sexy and tiny-sized models. They weren’t different than any other fashion label that used stick-like models for their ad campaigns. But last week, the company finally got it right by featuring model Myla Dalbesio. The model was featured in a campaign for the company’s new Perfectly Fit line, which was created to celebrate all different types of women and their different body types. The public basically embraced Calvin Klein for putting a model who weighs more than 90 pounds in their campaign, and I have to agree. I mean, after all, their last campaign featured Sons of Anarchy, hottie-with-a-body Charlie Hunnam (who was cast in 50 Shades of Grey but then dropped out) and Victoria’s Secret beaut, Doutzen Kroes. Calvin Klein finally putting a model who is not rail thin on a campaign speaks volumes. I think it is great for the fashion and modeling community. My only hope is in the future it shouldn’t be such a big deal for a size 10 to be the newsworthy moment of the week in fashion. But good job Calvin Klein, you get a love from me!

This week, Time magazine released a word banishment poll , asking its readers to vote words off the Time magazine island. The magazine gave readers words such as: bae, basic, I can’t even, literally, kale, turnt and yassssssss. The only problem was, they included the word feminist. I can’t even (hahahaha) begin to describe how much Time screwed this up. Apparently, they have nothing against the word, but rather, wanted to ban it because too many celebrities and politicians were stating their opinion on it. They wrote, “Let’s stick to the issues and quit throwing this label around like ticker tape at a Susan B. Anthony parade.” And I have to disagree with them. I think every woman in the world should be calling herself a feminist, and if the word is written on Instagram, Pinterest, Twitter and Facebook, so be it. Who cares if celebrities are declaring themselves feminists? Why is this a fad that should be “banned"? Well it shouldn’t be and Time now knows that because after a huge Internet uproar they issued an apology. I think we need a little bit more of Lena Dunham (self-identified public feminist, an example of someone Time is calling out) in our lives. We should all be listening to Beyoncé’s “Flawless” on repeat (in her song Queen B uses a clip of Chimamanda Ngozi Adichie’s TEDTalk on feminism.) So for this week, Time failed and deserves a loathe from me.

All pictures courtesy of Creative Commons.

Spider Bites: Passport Special for the Week of 11/14

By Lillian Tzanev | 16 hours ago

Through the Lens: “This is Not a War Story”

By Shannon McCammon | 5 days ago