MARGINS: A Defense of Divestment

In an op-ed published by The Collegian on April 3, junior Kevin Spear gave his perspective on the Black Student Coalition’s strategy to encourage donors to not give money to the University of Richmond, arguing  that, “This new campaign is short-sighted and selfish, contrary to some of their previous calls-to-action.”

Spear continued to elaborate on the “selfishness” of the BSC by lamenting the adverse impact a drop in donations on Giving Day could have on students’ access to resources.

Central to Spear’s analysis of the current tactics of the BSC is his assumption that, “In the end, all of this money goes to running UR and continuing to provide a high-quality of life for students.”

My question in response to this is as follows: Which students exactly are you defending for their undisturbed high quality of life? The apparent subjects of Spear’s concerns appear to mirror the very same students that Paul Queally, rector of the Board of Trustees, identified as “regular” just a month ago: white students.

As an active member of the BSC, the main argument that we have emphasized since the beginning has been the very antithesis of Kevin’s assumption: that UR has NOT been providing a high quality of life for students. The racist ideologies that dominate campus discourse commit symbolic violence against Black humanity. Recent and particularly salient examples include UR’s initial refusal to remove the names of Robert Ryland and Douglas Southall Freeman despite their histories of championing slavery and segregationist ideologies and the overt racism displayed by Queally in his characterization of "Black and Brown students" as irregular.

Spear emphasized his concerns about the fact that our demands to make UR a more equitable and just campus must be accompanied by pressuring UR in ways such that resources are held up from being distributed to those in need. Specifically, he quoted the following from the BSC’s Protect Our Web Statement: “Black students continue to struggle to bear the heavy load of pursuing higher education.”

Part of this problem, Spear rationalizes, is tuition, a common burden for all students — not just students of color. Here, it appears Spear tried to quote the statement to imply that our strategies are short-sighted and not fully conceptualized. He suggests that galvanizing support to suspend donations would somehow shrink tuition funds that Black students so desperately need.

This implied suggestion is racist in its assumption that the pool of financial aid that Black students depend on comes solely from the donations that UR takes in on Giving Day, as opposed to being hard-earned by each and every single Black student on campus.

In short, readers of his article, including myself, are led to the conclusion that Black students should just be grateful to have been offered acceptance to UR by way of these donations received on Giving Day, and should avoid any tactics devoted to making this university a more welcoming place for future students of color that would compromise our already fragile financial positioning, as if said positioning is not yet solidified.

I am writing this response to correct Spear’s defective analysis of our demands for economic divestment from UR by all those who can. Though Giving Day -- originally scheduled to begin on April 7-- was paused, I still feel the need to provide a defense of the BSC's call for divestment and offer some historical perspective on the traditions that ground our student activism.

First of all, the idea of divestment from institutions that are ideologically aligned with white supremacy is one that has been practiced for decades within the Black Radical Tradition, the genealogy of Black utilization and deployment of theoretical, ideological and political instruments to effectively resist white supremacy. Consider, for example, the Montgomery Bus Boycott of 1955-56. It is lightyears away from being “short-sighted” and “selfish.”

In Montgomery, the boycott was a successful strategy to end the dehumanizing and disenfranchising policy of racial segregation in Alabama public transit systems. Inspired by the Montgomery boycott, the past and current movements to boycott, divest and sanction apartheid South Africa and now Israel for their routinization of human rights violations also are aligned with this tradition of refusing to finance systematically racist governing institutions.

Our calls for alumni and current donors to divest from UR continue this genealogy of divestment as a firm and uncompromising refusal to tolerate institutions which actively promote white supremacy. In this case, UR is centering a tradition of celebrating slave owners and segregationists within the campus architecture.

Just like our predecessors in the Montgomery Bus Boycott, the anti-apartheid movements of South Africa and the BDS movements of Israel today, we are raising the question of whether or not our fellow humans are willing to stop economically supporting an institution that actively champions a racist who see’s white students as “regular” and students of color as everything but.

In no way, shape or form am I equating the genocidal events that occurred in the Jim Crow South, apartheid South Africa or occupied Palestine to the racism that we see here on campus. However, I am indeed saying that all of these movements are linked in the use of economic action, or inaction for that matter, to challenge the ways in which a white supremacist global order rationalizes its ideological and physical state violence to the ends of exploiting its most marginal.

It is anything BUT “selfish” and “short-sighted” for us to raise the question of how long we, the actively oppressed (as well as those who are benefiting from oppression) are willing to allow this system to remain in power without challenging the racist terms of order that govern it.

A common strategy of white supremacy, especially when it functions in the form of counterinsurgency, is to write off the demands and strategies of an opposition movement as insignificant. In doing so, the goal is often to paint the revolutionaries as unreasonable and childlike because what they call for is a deviation from the current status-quo.

Spear employs this strategy in his attempt to delegitimize our calls to divest as selfish. I feel that this sentiment is in alignment with Paul Queally’s apparent perception of us as irregular and thus irrational, inhuman beings. Both claims are in lockstep with white supremacy’s project to write-off Black people and our methods of resistance and bringing about change as insignificant, and as a radical deviation from what society deems as an acceptable way to voice discontent.

In “If they Come In the Morning… Voices of Resistance,” Angela Davis writes, “Our very survival has frequently been a direct function of our skill in forging effective channels of resistance. In resisting, we have sometimes been compelled to openly violate those laws which directly or indirectly buttress our oppression. But even when containing our resistance within the orbit of legality, we have been labeled criminals and have been methodologically persecuted by a racist legal apparatus.”

Here, Davis is warning current and future revolutionaries that regardless of the form of opposition against oppression, it is always met with counterinsurgency. My response to the guarantee of counterinsurgency is to never let up.

Davis also teaches us that, “We must act as if it is possible to radically change the world. And we must do this every day.”

Here, Davis implies the thought of the world as being static and unbending must never enter and set into the mind of the revolutionary.

From this, we as a Black Student Coalition, stand firm in our position of encouraging divestment from this university until it reckons with its history of neglecting Black students by answering each one of our demands with full and uncompromising participation. And so, as coined by the Liberation Front of Mozambique, A Luta Continua: “the struggle continues.”

Discriminatory disparities at UR: A reflection on the dismal state of higher education institutions in the 21st century 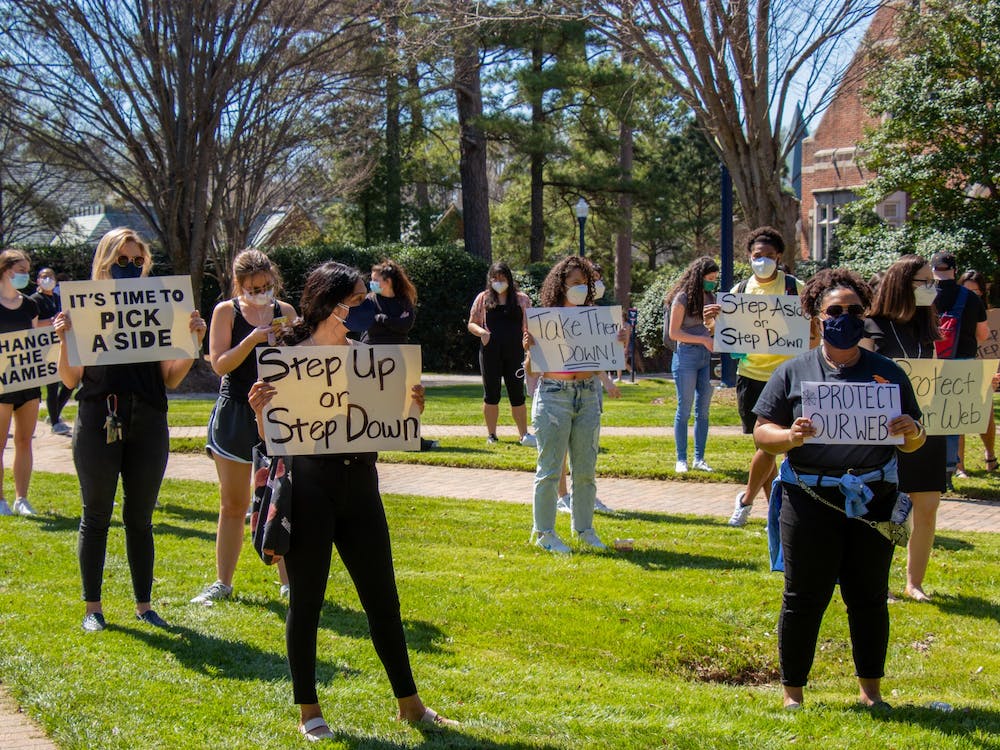 Students, faculty and staff protest UR's renaming decision at Board of Trustees meeting