The Virginia General Assembly is considering legislation that would require public universities to notify parents of students receiving treatment at the student counseling center whether the students are deemed a danger to themselves or others. House Bill 1251 would be optional for private institutions, including the University of Richmond. Del.

At open forum, Ayers and students discuss how to define Richmond

During a question-and-answer session on Monday, President Edward Ayers said the one word that comes up repeatedly when he talks to alumni is "community." "What I dream of is a class for undergraduates taught by a law professor that introduces them to the law," said Ayers, who noted that one of his goals for the University of Richmond was to unite the T.C.

Presidential candidates are now turning their attention toward the Feb. 12 Potomac Primary in Virginia, Maryland and Washington, D.C., where voters now find themselves in an influential position for this year's presidential race. Super Tuesday election returns from 24 states two days ago have left Sen.

Black History Month is bigger than its name this year

More than 25 University of Richmond groups and organizations have teamed up this year to celebrate Black History Month and establish a calendar of events that lasts through April, including four new events. The calendar started Jan. 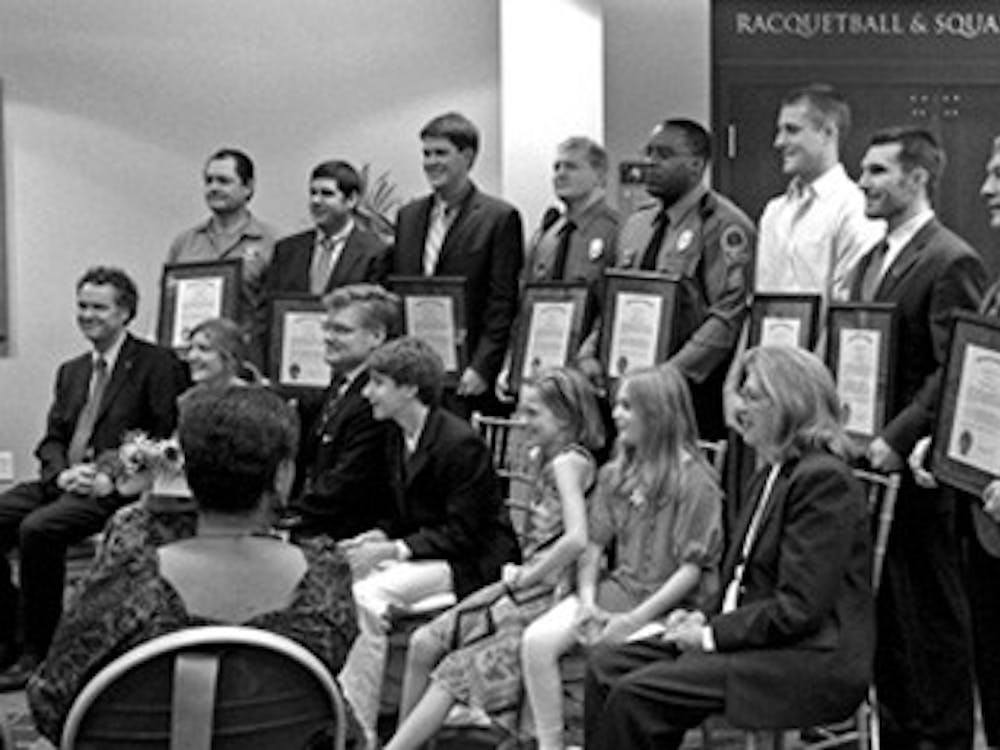 A ceremony was held at the University of Richmond's Weinstein Center for Recreation and Wellness last night to honor the people who worked together to save a local woman's life when she collapsed during a Pilates class last semester. Susan Gilmore greeted and hugged each of the 21 people who played a role in her rescue on Sept.

Two University of Richmond students received $10,000 each from Davis Projects for Peace and launched peace efforts in their home countries of Tanzania and Ethiopia this past summer. The initiative, with an objective to encourage students to design and implement plans to build peace around the world, was established last year.

Members of Richmond community signing on to online dating

Neal Holly sent slightly different versions of the same e-mail to about 30 women who caught his eye when he joined Match.com during the summer of 2003. Of the 10 responses he received, one was from a woman named Nicki.

More colleges are implementing campus-wide smoking restrictions across the country, with many becoming smoke-free entirely. But because there has not been any strong desire expressed by students and faculty to make the University of Richmond campus smoke-free, university administrators said no one should count on the school being added to the list of smoke-free schools anytime soon. According to the American Nonsmokers' Rights Foundation, more than 70 colleges and universities across the country have implemented smoke-free policies for their campuses as of Oct.

Zaundra "ZiZi" Gray, a lead barista at the 8:15 at Boatwright coffee shop in the Boatwright Memorial Library, was found dead in a Midlothian hotel stairwell last Friday.

At university health centers nationwide, the price of prescription birth control has increased significantly during recent months, with some students now paying three or four times as much for birth control as they were last semester. The price increase is the result of the federal Deficit Reduction Act of 2005, which cut back on numerous government spending programs, including Medicare and Medicaid.

Alice Eagly, a gender and leadership scholar and the department chairwoman of the psychology department at Northwestern University, spoke in the Jepson Alumni Center to a nearly full audience last night. The WILL program and the Jepson School of Leadership Studies brought Eagly to the University of Richmond as part of their Rhetoric and Reality: Race and Gender/Power and Politics speaker series.

A group of University of Richmond students is working to organize the launch of a publication comprising articles, poetry and art work related to women, gender and sexuality studies that are submitted by Richmond students. The staff of the journal, called "Inquiries," includes a seven-member student editorial board, led by executive editor Jason Tseng, a senior women, gender and sexuality studies major who worked on the staff of McGill University's women's studies journal while studying abroad.

Senior Class working to reach its goal for the class gift

With the Internet seemingly conquered, and significant space travel still a far away dream, a virtual world called Second Life has become the newest frontier, and University of Richmond administrators have purchased an island in Second Life in order to pursue possible conduits for education. Second Life, a virtual world based on the Internet and created in 2003 by Linden Research, Inc., allows people to log on to the Internet and live virtual lives in a rapidly expanding online community. But what makes Second Life so different from Internet conference rooms and live chatting is that users can create avatars that represent themselves in Second Life.

University of Richmond officials are mulling over the idea of relocating the Career Development Center to a more central location on campus, a move that would afford additional space for student job interviews, other career services and increase accessibility. In a statement released to The Collegian late last night, Brian Eckert, director of the university's media and public relations, said the CDC would remain at its current location at least for the remainder of the academic year, which ran counter to widespread rumors stating that construction in the Tyler Haynes Commons ? where the CDC was to be located ? would begin as early next week. Plans for moving the CDC to the Commons have been discussed but have yet to be approved, the statement said.

Health workers at Virginia Commonwealth University gave health screenings and antibiotics to more than 700 students and staff members who may have been in close contact with a 19-year-old student who died on Oct.

The Virginia Museum of Fine Arts has launched a new education program to make its collection accessible to people with Alzheimer's disease and their caregivers.