Widespread opposition from Virginia drivers over the state's recently imposed abusive driver fees, which range from $750 for driving on a suspended license to $3,000 for motor vehicle-related felonies, may soon apply to out-of-state drivers as well, lawmakers say. The new regulations, which Virginia lawmakers designed to raise $65 million for much-needed transportation projects, took effect July 1 and is at the nexus of a conflict that has resulted in differing court opinions and a patchwork of laws throughout Virginia. All 140 seats in the Virginia General Assembly are up for election this November, which has led many state lawmakers, sensing the unpopularity of the fees, to distance themselves from Gov.

The University of Richmond has an endowment estimated at $1.6 billion dollars, giving it the 43rd largest endowment of all colleges and universities in the United States.

Slowly but surely, Lakeview Residence Hall is changing the blueprint of the University of Richmond.

The University of Richmond has updated its laundry facilities, making the switch from a pay-per-use system to a one-time fee with unlimited use of brand new machines. Using a new system called eSuds, students can now go online to see which washers and dryers are available in each dorm or University Forest Apartment laundry room.

As university officials across the country have been evaluating their emergency response systems after a shooting at Virginia Tech left 33 dead last spring, University of Richmond administrators have made several updates of their own. Steve Bisese, vice president for student development, said the shooting "caused us to re-think our training programs and communications." Although he added that Richmond has had a good safety record, "we can't get fooled into a false sense of security." The university is more prepared now than it was before the Virginia Tech shooting, school officials say, but administrators recognize that the campus is a large community to protect, especially because of the many buildings and entrances. "It's impossible to guarantee 100 percent safety," Bisese said. University Police Chief Bob Dillard said although the recent updates have strengthened the university's preparedness for a potential shooter situation, the campus's safety system was still considered effective before the Virginia Tech shootings. "Prior to Tech we were more prepared than the vast majority of colleges," Dillard said. Before the Virginia Tech shooting, Richmond already had a response policy and hazardous entry training in place for years, the Emergency Response Team had been meeting regularly and firearms, except for those used by police officers, were outlawed on campus. But after the shootings in April, members of the campus community recognized a sense of urgency to update the alert system, said Kathy Monday, vice president for information services. "Tech really opened up people's consciousness about the need to communicate effectively," Monday said. With the heightened awareness felt on college campuses, Richmond administrators took several steps to update campus safety, which included purchasing a new alert system, making security changes within campus buildings, holding an active shooter drill and creating a team of administrators to evaluate reports of troubled students. "We want to be as safe as possible and also keep in mind not disrupting the education process," Bisese said. NEW ALERT SYSTEM INCLUDES TEXT MESSAGING Information Services recently purchased Connect-ED, an emergency communication system, from the NTI group, providing a single way for campus officials to launch emergency communications across the entire campus. The system, called UR Alert, can now send e-mails and leave voicemails on students' room phones in residence halls and.

A Pause to Remember Victims

By 7 p.m. Tuesday, pews were filled, leaving only standing room for the 7:30 p.m. vigil for Virginia Tech alumni in the Cannon Memorial Chapel. Maroon and orange shirts pervaded the more than 1,000 people who filled the chapel, forcing attendees to stand along the walls and sit in the middle aisle during the service held by the local Virginia Tech alumni community. Both the Service of Evening Prayer Tuesday and the Candlelight Vigil Monday honored Virginia Tech and offered words of comfort and hope to those in attendance. Acting Chaplain Kate O'Dwyer Randall opened Tuesday's service and spoke about the reaction of the Richmond community. "Like the rest of the nation, we at the University of Richmond watched with fear and shock as the day unfolded," she said. O'Dwyer Randall also mentioned a Richmond student who approached her after Monday night's vigil.

Students' study abroad tuition does not add up

To study abroad for a semester at the St. Louis University in Madrid, Spain, tuition costs are $9,900. 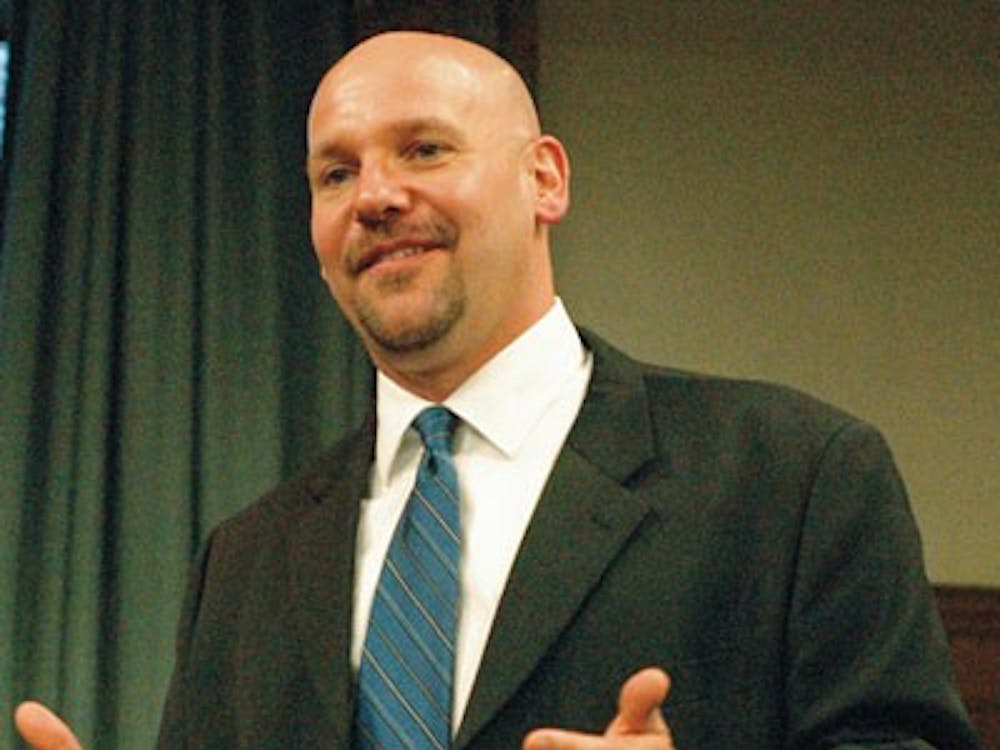 Vice President for Student Development Steve Bisese announced Monday that Joseph Boehman would succeed him as dean of Richmond College. Boehman is currently the assistant director for residential education at the University of North Carolina at Chapel Hill.

The University of Richmond's Office of the Chaplaincy started the new semester with new staff members and a myriad of ideas to bring students back to the chaplaincy. All of the changes are taking place in the wake of the departure of former Chaplain Daphne Burt, who resigned on Dec.

The final three candidates for the vacant position of dean of Richmond College visited campus this week, meeting with students and faculty and getting a better feel for the environment in which one of them may be working. "All of the meetings had a great turnout from faculty and staff," said Steve Bisese, vice president for student development and former RC dean.

Environmentalist to speak on grassroots activism

Lois Gibbs knows the power of grassroots activism well. In 1978, after discovering that her town of Love Canal, N.Y., sat on top of 20,000 tons of toxic waste, Gibbs started a movement to remove families from the area.

Whether he was unsuccessfully attempting to dye his hair red with Kool-Aid or writing interesting words he heard that day all over his hands and arms, Michael Robertson kept his friends laughing. Robertson's friends continued to laugh as they gathered in the Whitehurst Living Room last Thursday to share stories and memories about "Kel" at an informal memorial service. Robertson, 20, who transferred to Boston University for his sophomore year, fell four stories to his death from his dormitory window on Jan.

Virginia attorney general Robert F. McDonnell addressed students, faculty and staff about how easy it is for him as a Republican to work with a Democratic governor. McDonnell spoke at a symposium hosted by the University of Richmond Law Review called "Avoiding Constitutional Conflicts in a Divided Executive" at the Jepson Alumni Center last Thursday evening. About 75 law students, alumni, faculty and lawyers gathered to hear respected constitutional scholars debate the legal repercussions of conflicts between state governors and their attorneys general. State attorneys general serve in the executive branch as the chief legal advisers to the state government and its various agencies.

Two University of Richmond professors were among 161 recipients of $40,000 fellowships from the National Endowment for the Humanities for research projects during the 2007-08 school year. Gary L.

WILL students' stalking bill gets new life in House

The bill introduced two weeks ago by Women Involved In Living and Learning students and De'Nora Hill's mother to increase the penalties for stalking in Virginia has a new life. After the initial testimony and debate, the bill was placed in the lockbox where many thought it would remain, thus killing the bill. "Everything got jumbled when politics came into play," said Shanaya Fullerton, one of the WILL students whose class project led to the original bill.

When it comes to downloading music, students rarely have been able to describe the action as both "free" and "legal." But that will no longer be the case for University of Richmond students. The university, in association with Ruckus Network Inc., is providing a free music downloading service that is now available to students, granting them access to more than 2.5 million songs. "We had heard from students that they really would like a way to access music legally," said Kathy Monday, vice president for information services who, along with her staff, worked with Ruckus to finalize the university's contract.

With the start of the new semester came a new home for the Bonner Scholars Program. After its students launched a letter-writing campaign last semester, the program moved from the Office of the Chaplaincy to the Center for Civic Engagement. Junior Sarah Potter, one of the students appointed to speak on the Bonners' behalf, said that although a potential move had been discussed, it had been placed on a backburner and it was the students' actions after former program director Grace Holcomb's firing that moved the issue to the forefront. "I would say that it was a direct result of what we did," Potter said.

Ex-VUU students sentenced to jail for rape of UR student

A Henrico County Circuit Court sentenced two former Virginia Union University men on Tuesday for the rape of a Westhampton College student. John Patrick Cates, 21, and Brian Anthony Ridgeway, 24, were sentenced to eight-and-a-half years and eight years in prison, respectively, for the rape of a WC student last year. 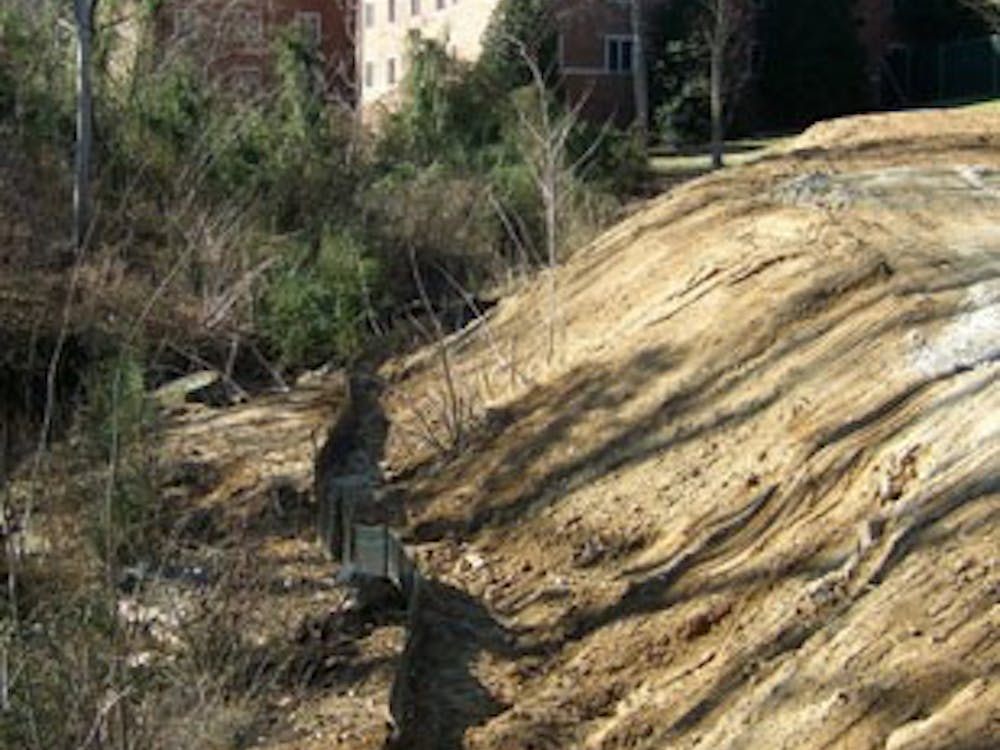 It snakes out from Lora Robins Court, braving the unsteady terrain as it twists and winds around the corner of UR Drive and Westhampton Way.

Anyone who has ever been bored at the gym has a few new toys to play with in the new Weinstein Center for Recreation and Wellness. The 90,000-square-foot fitness center offers students and members a number of machines and gym accessories that were not available in the previous facility.