Baseball replay makes too much sense

How many times during a baseball game do you think: "Man, that was close. I hope they show it on replay." Usually, moments later, your wish is granted and technology answers all questions about whether the player is safe or out, or a ball is fair or foul. 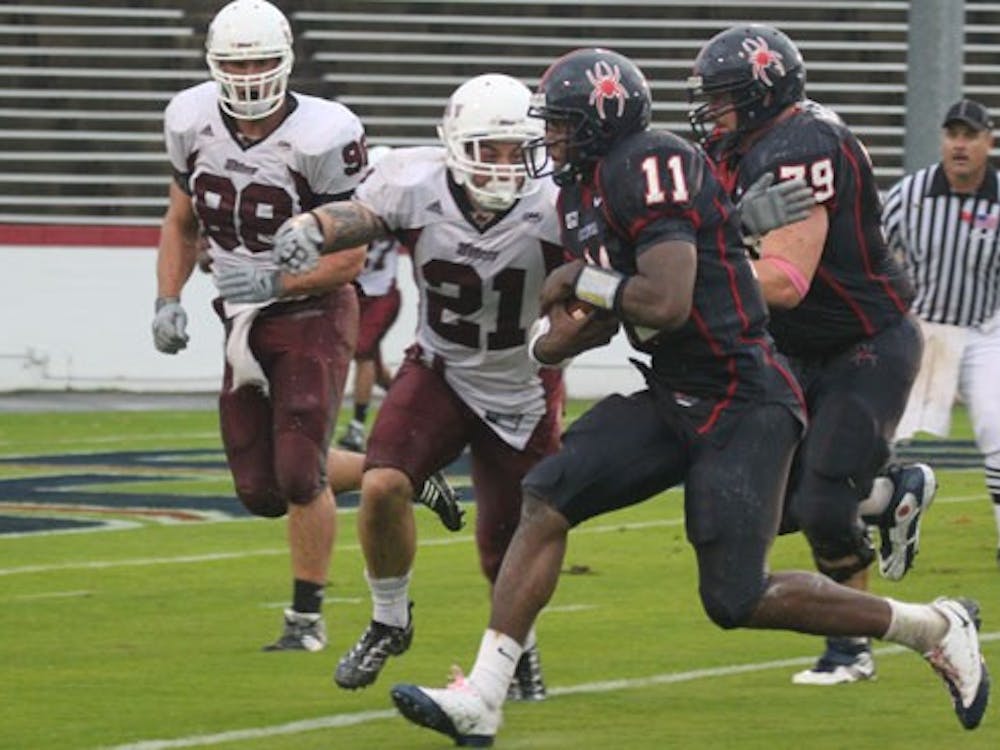 No. 1 Richmond runs past UMass for 16th-straight win

The University of Richmond football team took advantage of seven turnovers by the University of Massachusetts on the way to its seventh win of the season, beating the Minutemen 34-12 on a rainy Saturday afternoon at UR Stadium. "It's hard to win football games and these guys played their hearts out," Richmond head coach Mike London said. 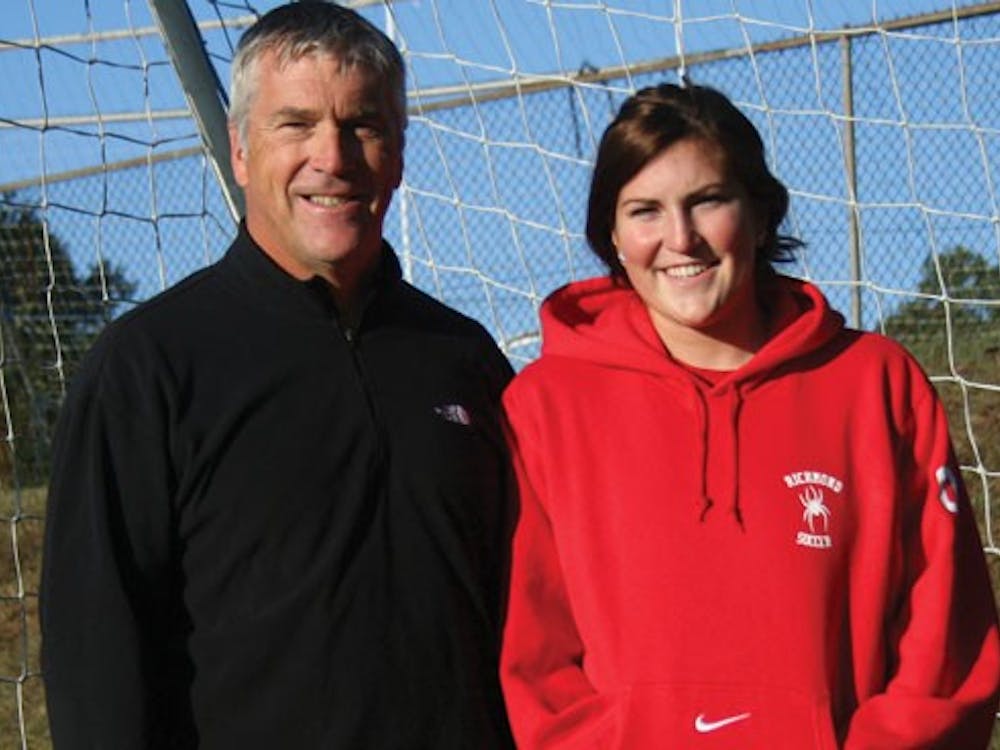 When freshman Allie Albright started thinking about where she would play soccer in college, the one school she ruled out immediately was the University of Richmond. She said she hadn't wanted to play for her father, Peter Albright, who has been Richmond's women's soccer coach since the program's inception in 1996.

The 2009 football season is well under way and the Spiders are playing well enough to have six wins versus zero defeats.

Richmond is already the home of the only Spiders in the country. Now, it's also the home of the Flying Squirrels. The city will be the new home of the San Francisco Giants double-A baseball team starting next spring, and after a "Name the Team" contest that drew more than 15,000 nickname suggestions, the franchise chose its new name: the Richmond Flying Squirrels. No, I'm not kidding. The fact that the team will don caps and uniforms featuring our furry, flying, four-legged friends is comical enough in itself, but the nicknames that the Squirrels beat out were even more unusual. The franchise chose five finalists from the entries, which were submitted online. 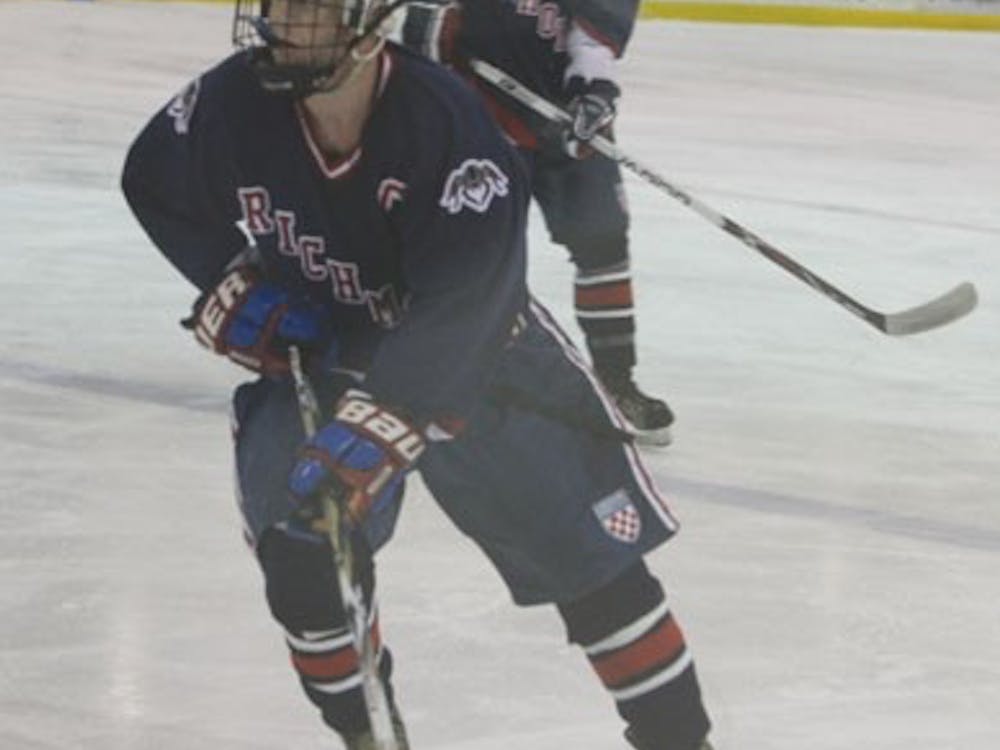 The University of Richmond club ice hockey team started its ninth season with early success. The Spiders are 4-2 overall and 3-0 in the Blue Ridge Hockey Conference, which consists of schools from Virginia, North Carolina, South Carolina, Maryland and Washington.

? Pittsburgh Steelers kicker Jeff Reed was cited for public intoxication and disorderly conduct outside a bar a few blocks from Heinz Field hours after the team's 27-14 win against the Cleveland Browns on Sunday. 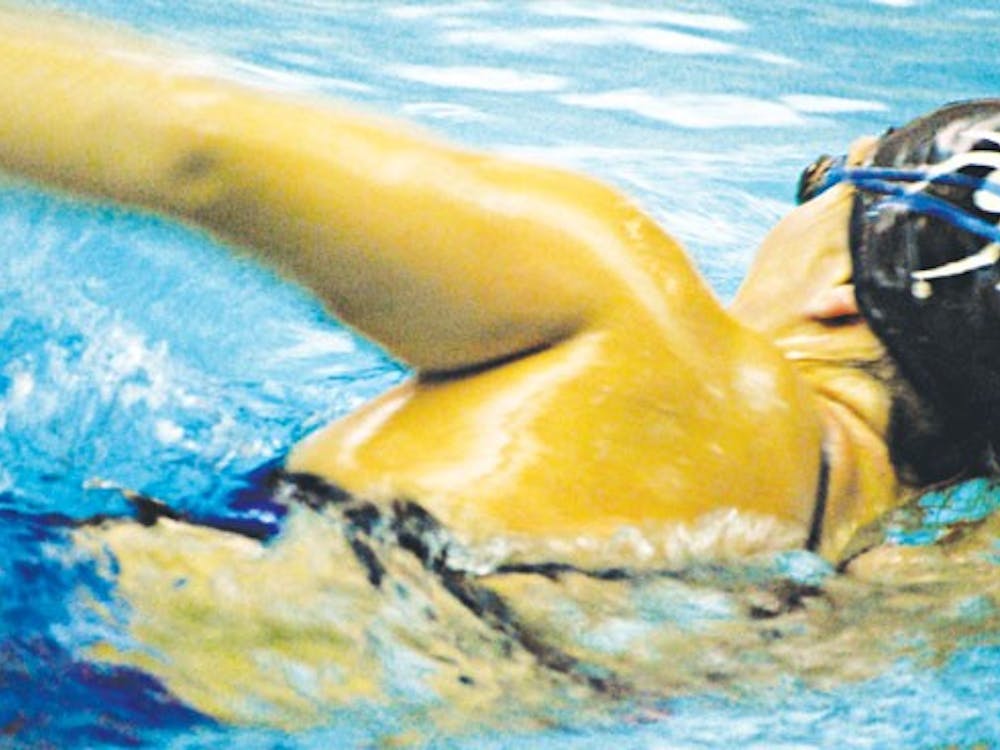 The University of Richmond's women's swimming team opens its season tomorrow night at LaSalle University - the first time the Spiders have swum against an Atlantic-10 team during the regular season in five years. As the team practiced last week in the Robins Center Natatorium, a board marking the team's eight-consecutive A-10 championships had an empty third row waiting to be broken into. 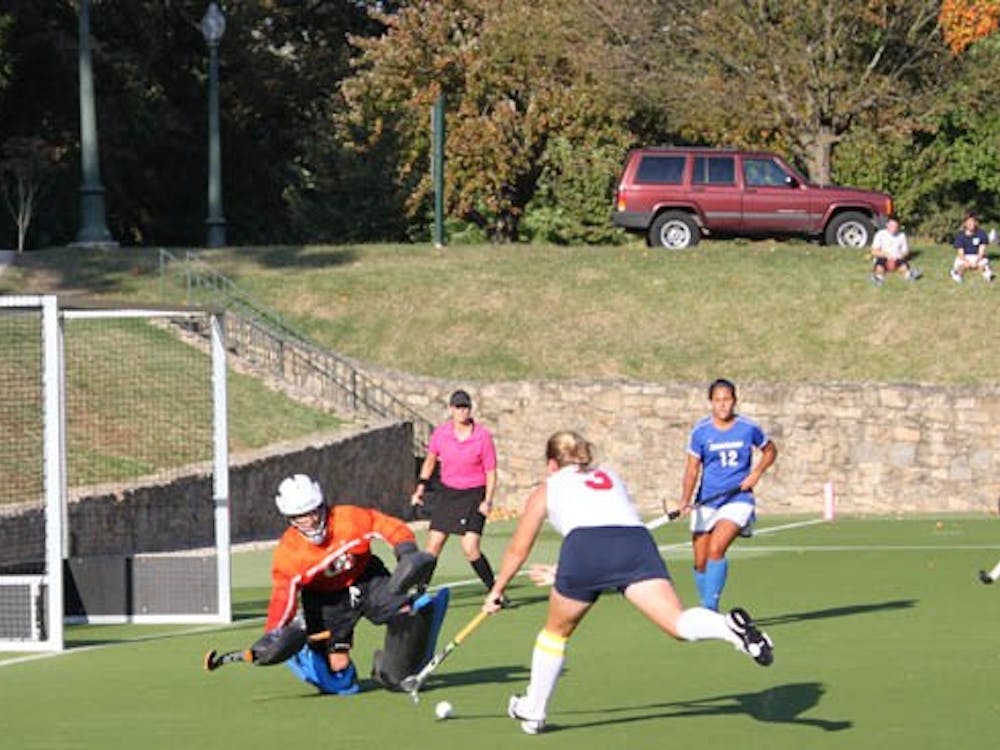 The University of Richmond field hockey team remained undefeated in conference play by defeating West Chester University 2-0 Sunday afternoon during its final home game of the season. Behind goals from redshirt junior Dani Pycroft and sophomore Katelin Peterson, the Spiders improved to 3-0 in Atlantic-10 conference play and shut out an opponent for the sixth time this season.

The University of Richmond football team used 28 second-half points to defeat the University of Maine 38-21 on Saturday, extending its school-record winning streak to 15 games. The Spiders trailed 14-10 at halftime, but started the second half by scoring 28 unanswered points, highlighted by senior safety Derek Hatcher's 90-yard punt return touchdown. During the first drive of the second half, Richmond senior quarterback Eric Ward led the team down the field before throwing a three-yard touchdown pass to sophomore wide receiver Donte Boston. 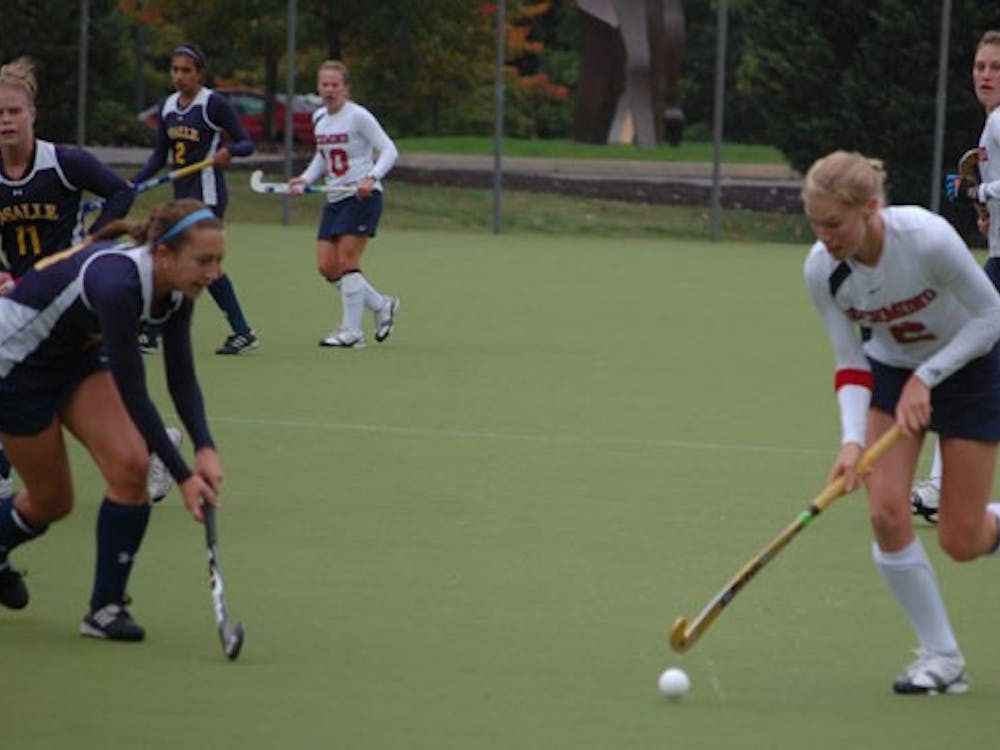 The University of Richmond field hockey team defeated La Salle University 4-0 behind a pair of goals by senior Sarah Blythe-Wood. Blythe-Wood's two goals raised her season total to 16, which is tops in the Atlantic-10 Conference. Sophomore Katelin Peterson and junior Dani Pycroft added the other two goals for the Spiders. 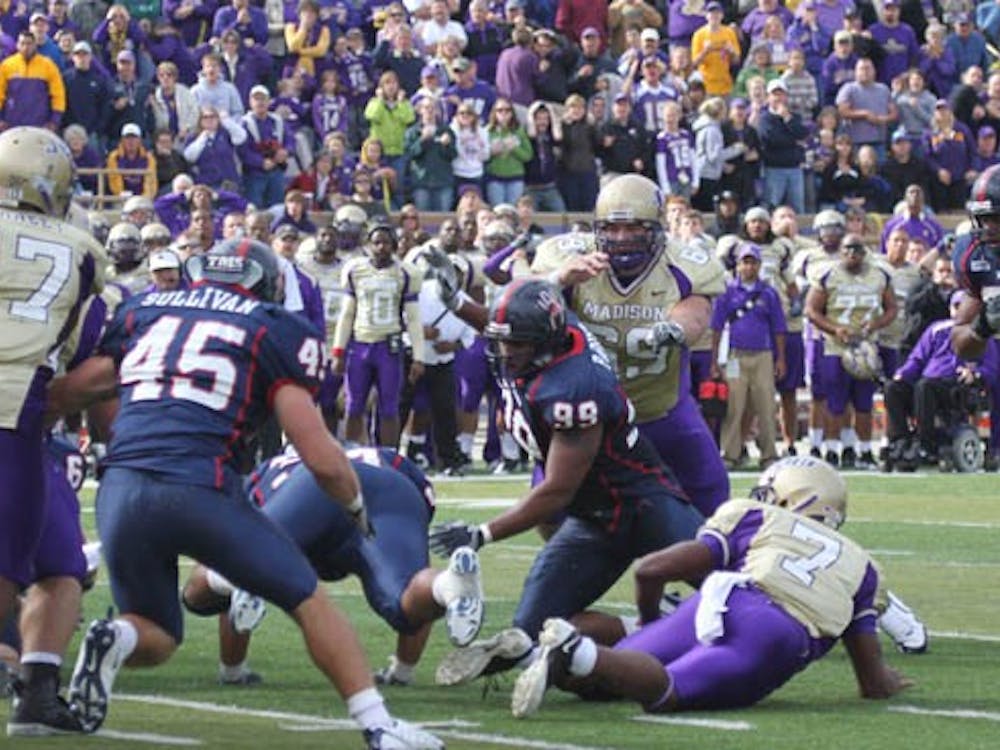 James Madison University was able to convert three out of its four penalty corners to defeat the University of Richmond field hockey team 3-0. JMU junior Dolores de Rooij scored all three of her team's goals off of the penalty corner. 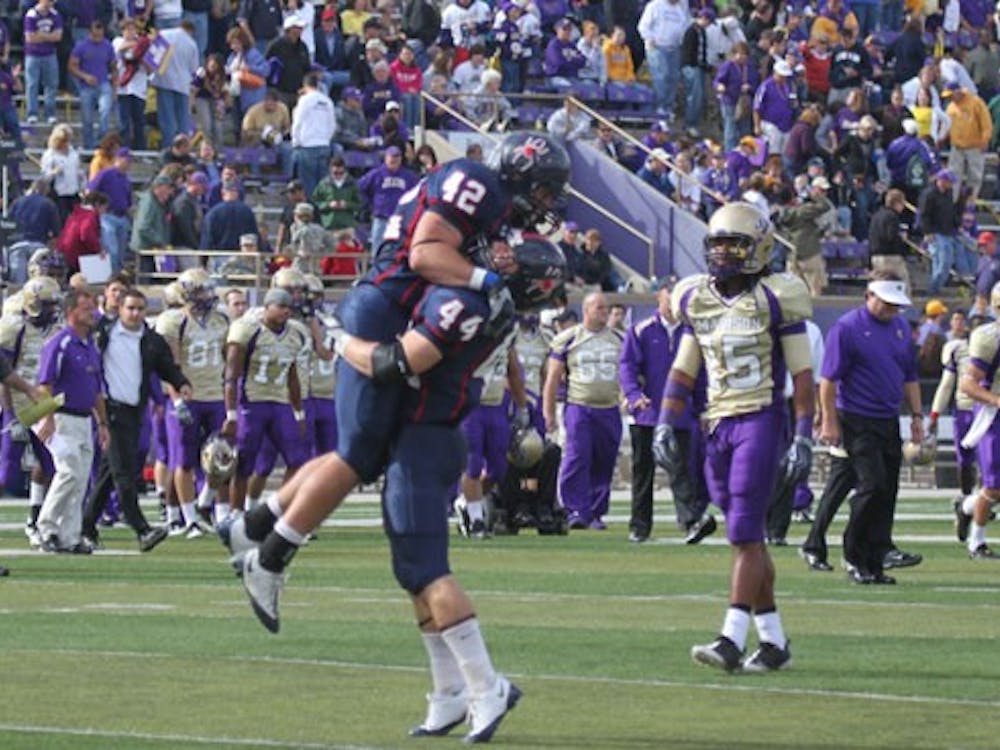 HARRISONBURG, Va. ? Six yards separated the University of Richmond football team from its first loss in 364 days. But with 58 seconds remaining during the fourth quarter of Saturday's game, Richmond senior defensive tackle Martin Parker forced James Madison University freshman quarterback Justin Thorpe to fumble as he tried to run for the end zone. 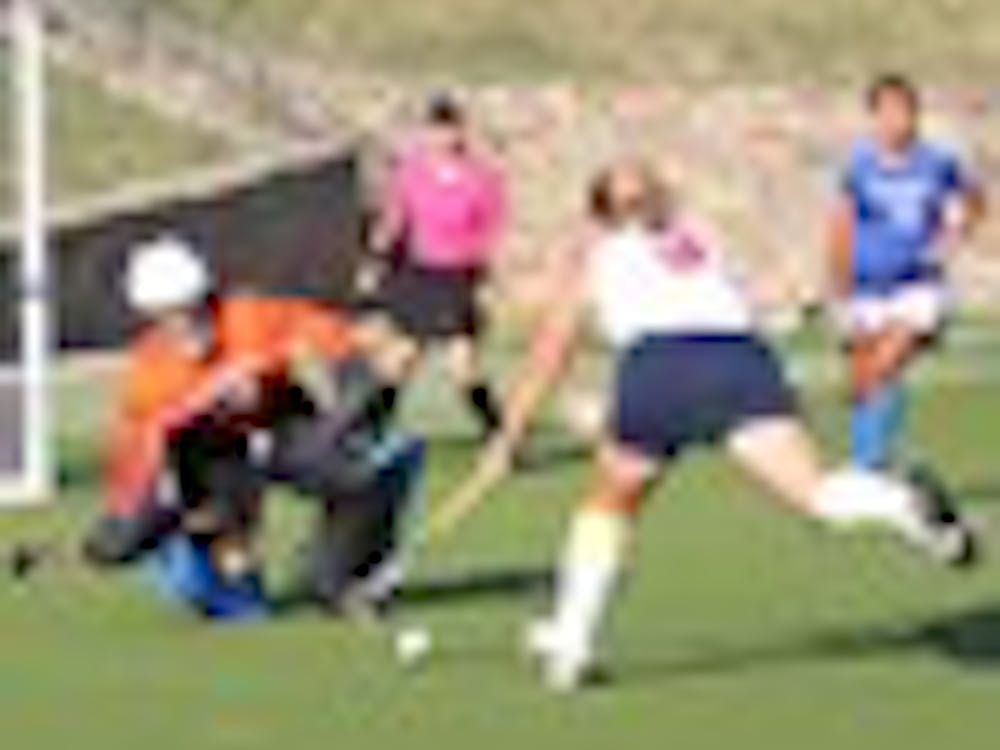 In its Atlantic-10 Conference opener win against Saint Louis University, the University of Richmond field hockey team tied or set three school records. The Spiders tied a school record for goals during a game with 12 as they shut out the Billikens. "The thing I was most excited about is that - outside of the penalty stroke which can't be an assisted goal - that eight of the other 12 goals that were scored were assisted." Richmond coach Gina Lucido said.

Professional referees rarely hear praise and constantly hear criticism. A good day for an official is a day in which he goes unnoticed.

The United States had a wake-up call last week when it was announced in Copenhagen that Rio De Janeiro beat out Chicago for the Summer 2016 Olympic bid. Chicago did not just lose the bid to host the summer Olympics. 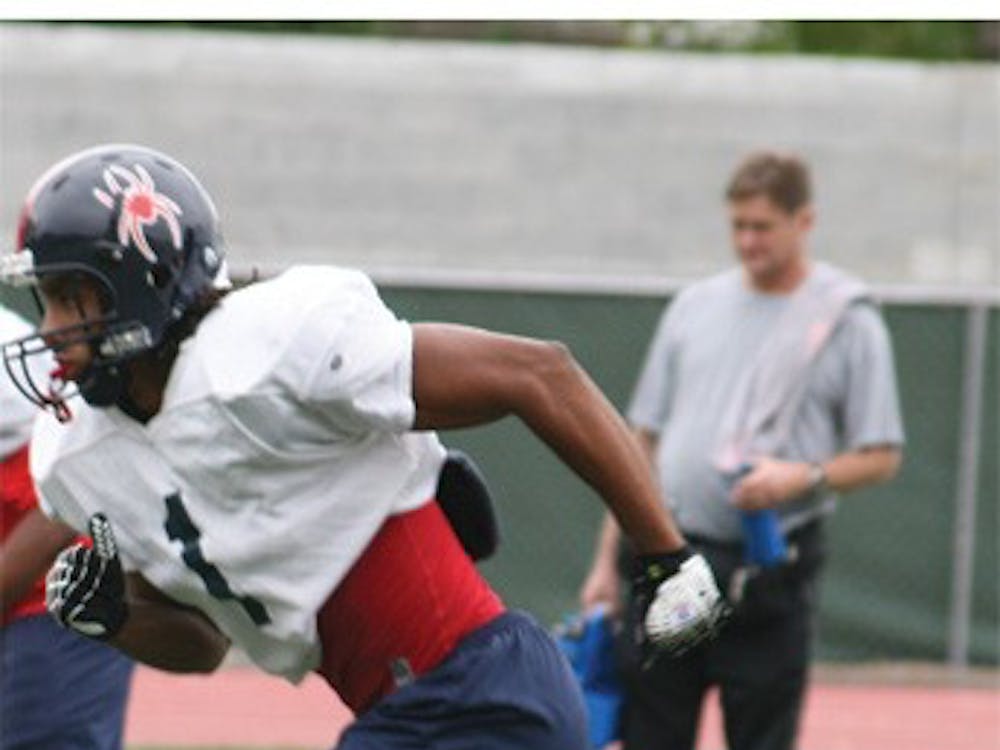 University of Richmond junior wide receiver Kevin Grayson and University of Florida Heisman Trophy winner Tim Tebow now have two things in common. Both players helped lead their teams to national championships last season, and they have both been honored for the positive impact they have in their communities. Allstate Insurance and the American Football Coaches Association announced on Sept.