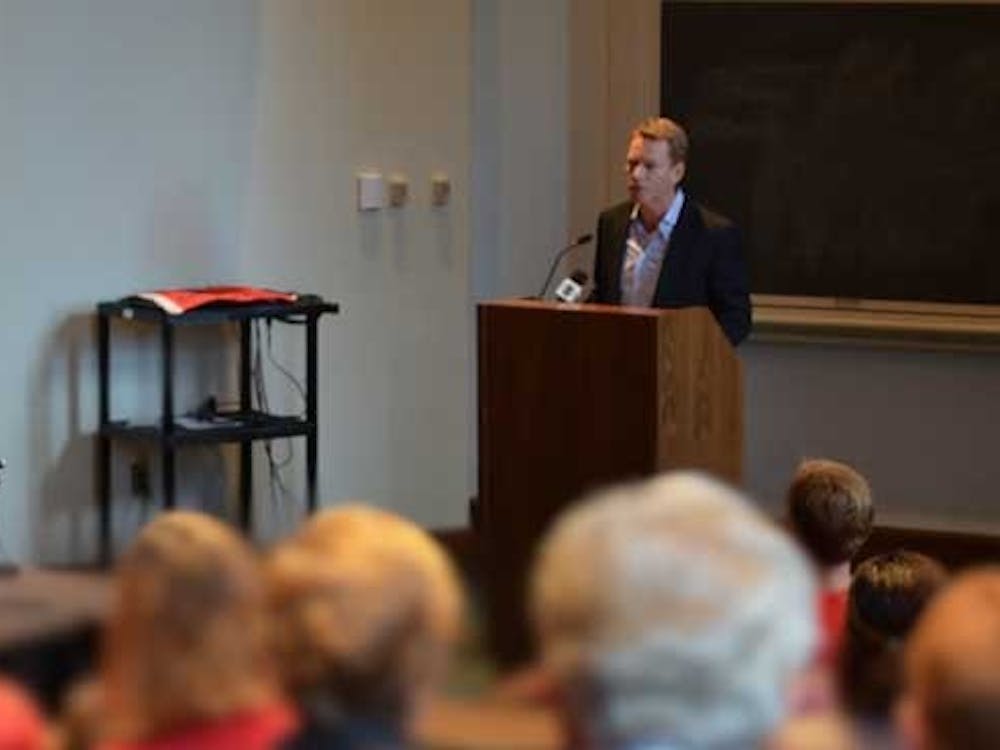 The press conference hosted by University of Richmond soccer alumni on Friday presented a question of right and wrong, said men's soccer coach Leigh Cowlishaw. Maybe the answer will not be reinstating soccer and track, but the decision certainly needs to be scrutinized with all the facts presented, he said. Soccer alumnus Scott Byrnes, '91, led off his speech by acknowledging that people might have seen the amount of work that has gone into fighting the decision to cut the men's soccer and men's track and field teams as overkill.

Computer dying so I'll end this now. Thanks for joining me, I'll provide a quick recap soon with any new information that may come. "You can put new people in their slots," Byrnes says in response to a comment about President Ayers and other board members. Byrnes answers my question about the Washington Post article released yesterday, saying it didn't include all the information he had hoped it would. "We're not gonna stop," Byrnes answers to a question from RTD. Byrnes now taking questions with two other soccer alumni, one of which is Jim Brady, '85. Byrnes finishes his speech, to a standing ovation, by pulling out a Richmond flag and saying, "Carry the Flag, boys." "I ask you to withhold your donations to the University of Richmond until the Board of Trustees makes this right." Byrnes now asking the board to reinstate the soccer and track programs as soon as possible. "You had an organized group of soccer alumni banging on your door to help, and you ignored us," Byrnes says, in spirit to Ayers. Byrnes says that if the soccer alumni had any idea the program was in jeopardy, they would've brought their arguments straight to the Board of Trustees before the decision was finalized, and the "lacrosse inner circle" couldn't afford that to happen. Major Donor refused to engage with soccer alumni because "it would be inappropriate" because he is a member of the Board of Trustees, Byrnes said. "Eliminating a men's sport will not be an option," Byrnes says, quoting an email about a conversation another soccer alumni had with VP of advancement Tom Gutenberger last summer. Neither Ayers or Miller here right now I don't believe.

Alumni highlighting deceit in effort to revive track and soccer

The alumni of the recently cut Richmond men's soccer and track and field teams have continued their strategic planning efforts, with large parts of those efforts culminating right before Homecoming Weekend. On Tuesday, eight track alumni published and distributed a 28-page paper, titled "An Examination of the University of Richmond's 2012 Athletic Department Reconfiguration." In the paper, the alumni highlight why outdoor track should be reinstated, citing sources for all research and claims, while indoor track and soccer should be given an opportunity to raise the funds needed to remain along with the addition of a women's sport. "We're just trying to organize everything that we've heard from Dr. [Edward] Ayers and his chief of staff [Lori Schuyler] and [Athletic Director] Jim Miller," said Jon Molz, 2008 track alumnus and current assistant coach for the track and cross country teams.

What if Richmond kept the track and field team?

I can remember it like it was yesterday. It was a crisp November afternoon and the fallen leaves were crunching beneath our feet as we made our way down Westham Station. I was out for a run with fellow Spiders Matt Llano, Jonny Wilson and Tim Quinn.

On the morning of Saturday, Sept. 22, the Gottwald atrium was scattered with laptops and cell phones.

Target commercial star may transfer because of track cut

In a Target commercial that aired during the coverage of the summer Olympics, an excited high school senior opens his acceptance letter to attend the University of Richmond. That high school senior, Tim Gruber, is now a freshman and a member of the men's track and field team.

The Board of Trustees' recent decision to eliminate the men's track and field and soccer programs from the Division I athletic offerings has sent the university community into an emotional whirlwind.

Video: UR Save Our Sports Forum 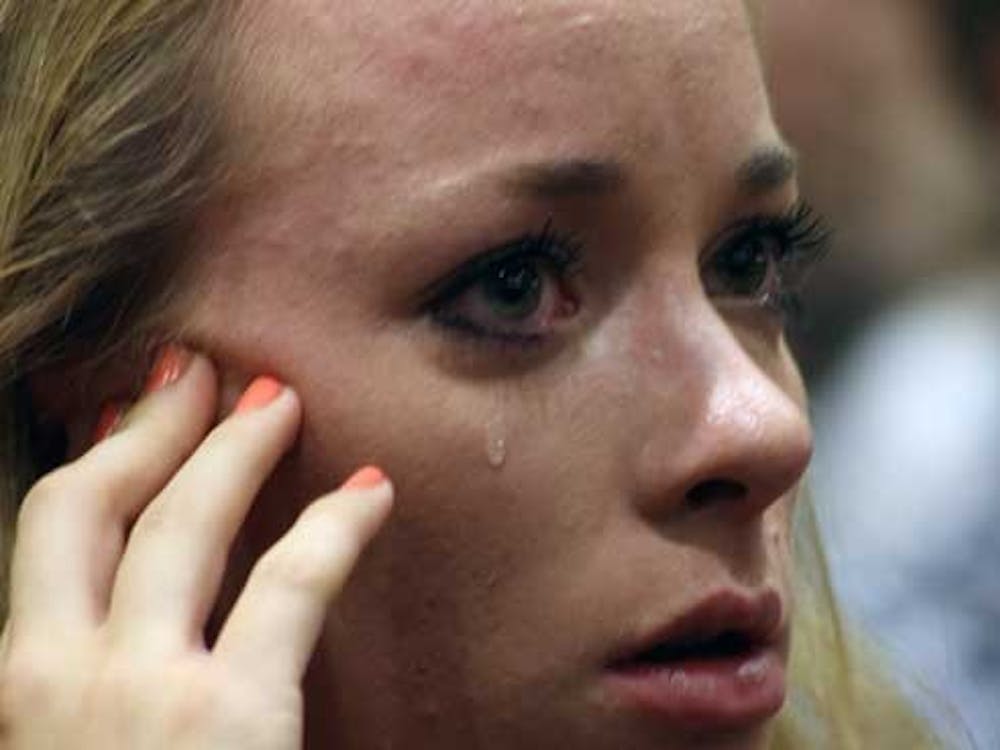 Photo Gallery: UR Save Our Sports Forum

University of Richmond community members gathered in the Ukrop Auditorium Sunday afternoon to discuss the Board of Trustees' recent decision to cut the men's track and field and soccer teams in favor of adding a men's lacrosse team at a forum called UR SOS (Save Our Sports). President Edward Ayers spoke and answered questions about the decision and why it took place, while others spoke in opposition to the news. 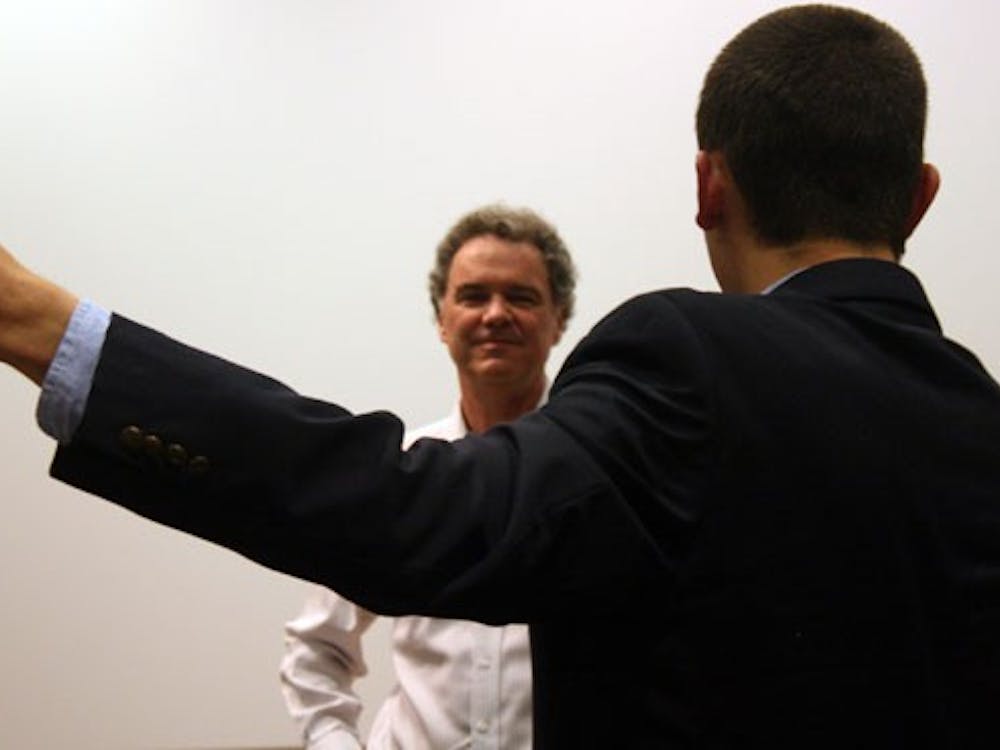 Richmond community unites in effort to 'Save Our Sports'

After the Save Our Sports forum, President Edward Ayers said the Board of Trustees' decision to eliminate men's soccer and track and field programs was final and would not be discussed further. The meeting was held on Sunday at Ukrop Auditorium in Queally Hall for those in opposition of the decision to voice their opinions and to discuss potential alternatives.

Rapid Reaction: UR Save Our Sports Forum

What Happened: University of Richmond students, faculty, administrators, alumni and parents packed the Ukrop Auditorium Sunday afternoon to discuss, in a public forum, the Board of Trustees' decision to cut men's soccer and men's track and field to add men's lacrosse.

Live Blog: UR Save Our Sports Forum

The coordinator closes the forum, asking everyone to please write down remaining questions on the given note cards with email addresses. 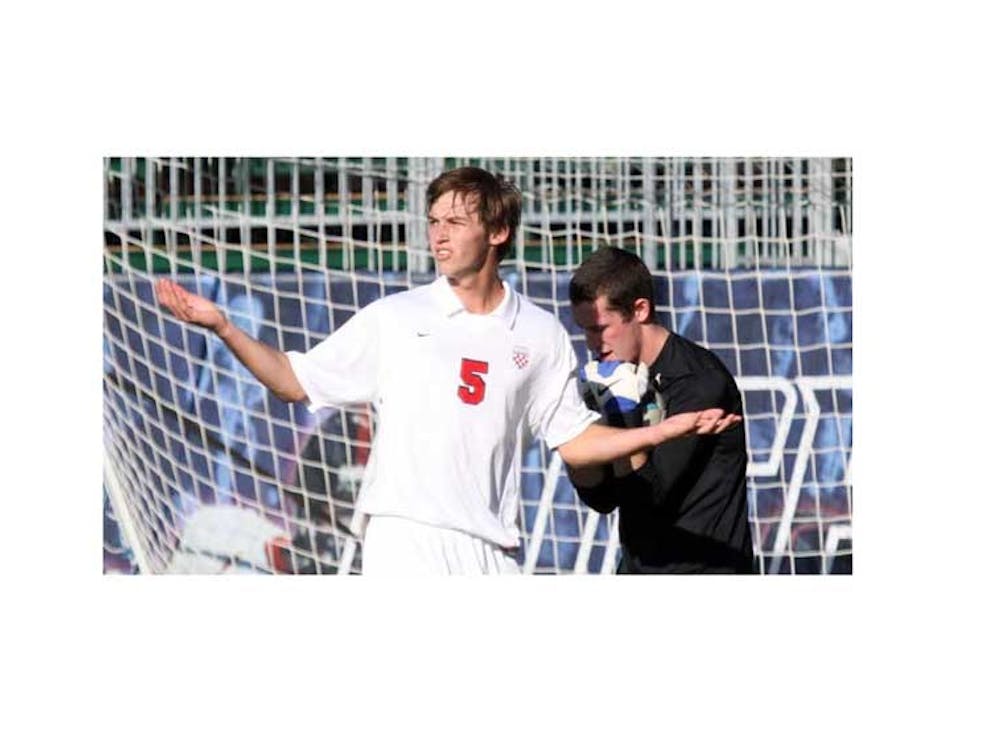 Community not accepting soccer and track cuts without a fight

The announcement that the University of Richmond is cutting the men's soccer and men's track and field programs to add men's lacrosse has sent shockwaves throughout the university community, including alumni, athletes, students and faculty. The Board of Trustees ultimately made the decision, said Jim Miller, Richmond athletic director. 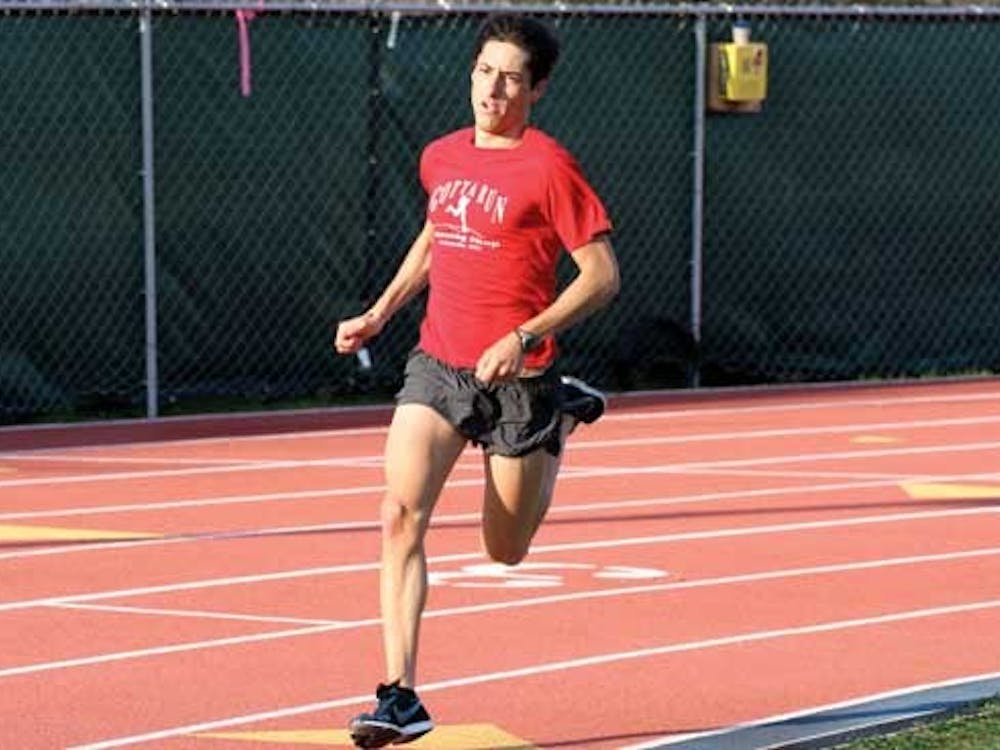 Men's track athletes not on cross country will remain at UR

Despite the announcement that their team will be eliminated at the end of the 2012-2013 season, the six men who are on the University of Richmond track team, but do not also hold spots on the cross country team, have decided to finish out their education at the university. Even though the majority of the track team members are also members of the cross country team, not all students appear on both rosters.

[The following letter was written in response to an email from Jim Miller, the director of athletics, announcing that track and field would be officially cut from Richmond's sports roster. Right now it is 8:56 on a Saturday night. 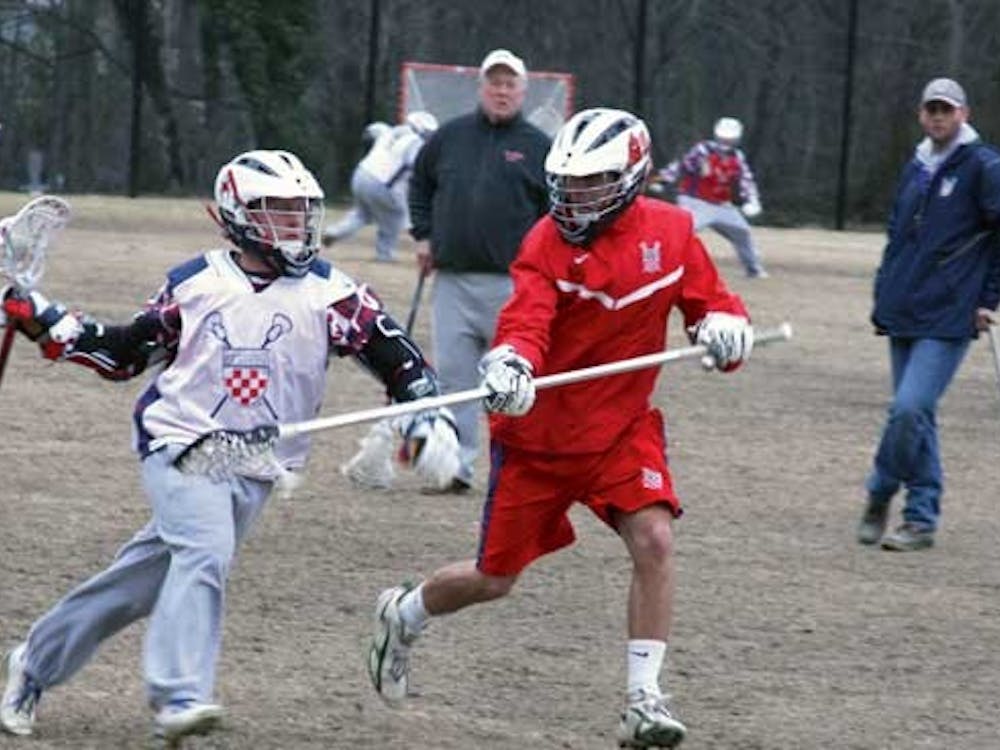 Editors note: Senior Charlie Hudson spoke with The Collegian before the team was asked to not speak to the media. Yesterday, about three hours before the varsity club lacrosse team had its first practice of the season, Charlie Hudson, a senior player, sat down for an interview about the team's soon-to-be NCAA division I status. "It was definitely exciting," Hudson said, remembering how the team reacted to the announcement.

Cutting the men's track and field and men's soccer teams in order to add men's lacrosse was not solely the athletics department's decision, Richmond Athletic Director Jim Miller said. "The decision was made at the Board of Trustees' level," he said. The university established the committee, which had a representative from the athletics department on it, in April of 2011 that was composed of faculty and administrators from across campus, Miller said. "[The committee] did a year-long study of what sports we should have, looking at budgets, admissions issues and everything else you could imagine," he said. 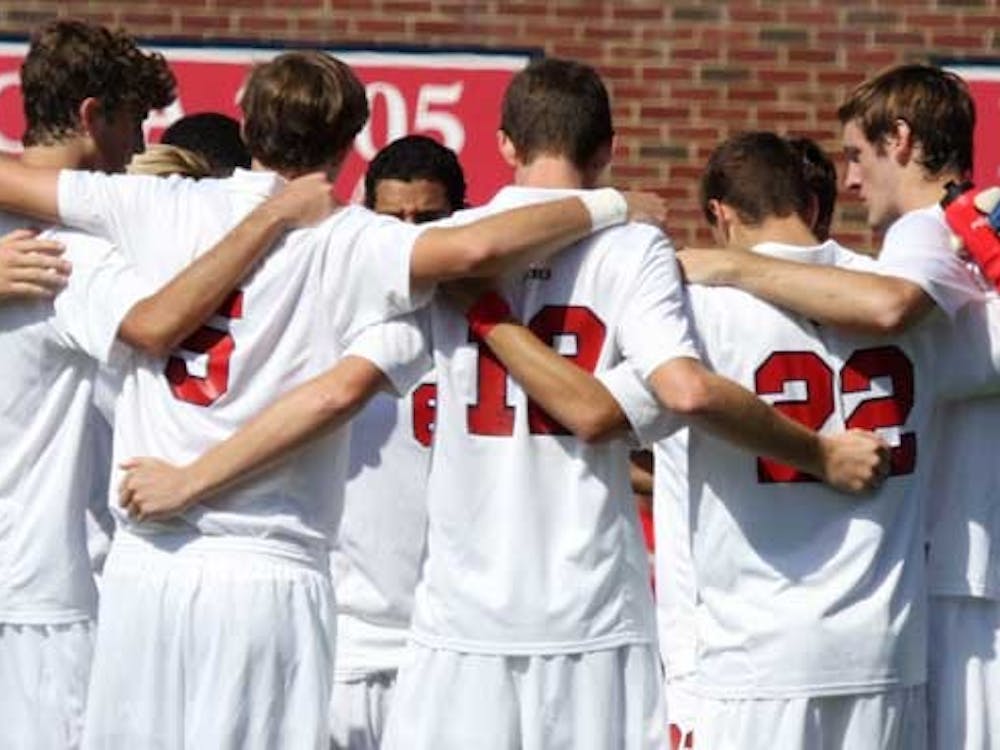 Men's soccer and track & field cut in favor of lacrosse

The Richmond women's track and field team placed third in the 2011 Atlantic 10 Outdoor Championships and strived for nothing less this year, said freshman sprinter Jasmine Smalls. The team had its first meet Dec.