The Richmond Swim and Dive team won the Atlantic 10 Championship at the SPIRE Institute in Geneva this week with a total of 687.5 points.

The Spiders ended their first night of the championship in second after placing second in both the 200 medley relay and the 800 freestyle relay. The team finished with 68 points -- 12 behind first place Davidson College. First-year Katelyn Pennell and sophomores Sara Greene, Claire O'Shaughnessy and Lauren Medlin took home the silver for Richmond in the 200 medley relay, finishing with a time of 1:41.14. In the 800 freestyle relay, first-years Alexa Connors and Megan Carson, junior Maggie Purcell and Medlin added another silver medal, finishing with a time of 7:19.84.

After the second day in the A-10 Championship, the Spiders jumped to the top spot after strong performances from both swimming and diving. All three of the Spiders' divers placed in either the championship final or consolation final. Six of seven Spider swimmers qualified to swim in the 500 freestyle finals. Junior Grace Palfreyman and first-year Petra Mijic swam in the consolation finals. Mijic finished 14th overall at 4:57.09, and Palfreyman came in 15th at 4:57.31. The remaining four Spiders swam in the finals. Connors finished in second place with a time of  4:50.92. Carson finished in fifth at 4:54.23. O'Shaughnessy took sixth with a time of 4:56.19. Pennell took eighth, finishing at 4:56.68.

The Spiders concluded the meet in first and won their 16th Atlantic-10 Championship trophy on the fourth day, ending with 687.5 points. Connors was named the meet's most outstanding rookie performer. Connors finished the meet with three silver medals in the 500 freestyle and the 1650 freestyle and  came in sixth place in the 200 freestyle race.

The Spiders beat University of North Carolina at Greensboro 4-1, winning all three doubles and sweeping the singles matches in their final home game of the season.

The men’s tennis team lost 1-6 against the College of William and Mary.

They lost both doubles matches and five singles. First-year Daniel Kliebhan and junior Josh Keitelman lost 0-6 in the first doubles match. William and Mary clinched the doubles point after first-year Alaister Burke and junior John Walsh lost 3-6. The Spiders earned their only point as Walsh won in straight sets, 6-2, 6-3.

The Spiders came back from their three losses in doubles to sweep all six singles for a 6-1 win over Saint Joseph’s University.

The No. 13 Spiders beat Virginia Commonwealth University 19-13, sweeping the season series and moving to 7-1 on the year and 3-0 in Atlantic 10 play.

The No. 13 Richmond men's lacrosse team improved to 4-0 in Southern Conference play with a 14-7 win over Jacksonville University on Saturday. Sophomore attack Dalton Young led the Spider scorers, tallying four goals. Sophomore attack Richie Connell added three goals in the win. Midfielders senior Mitch Savoca and graduate student Tyler Shoults each had a pair of goals. Graduate goalie Jack Rusbuldt held the Dolphins to just six goals in 57:38 of play and collected 11 saves. The Spiders went 21 for 39 on shots on goal. The team won face-offs 17-7 and went 2 for 4 on extra-man opportunities.

The No. 10 Spiders collected their first loss of the season against No. 1 JMU on Saturday. 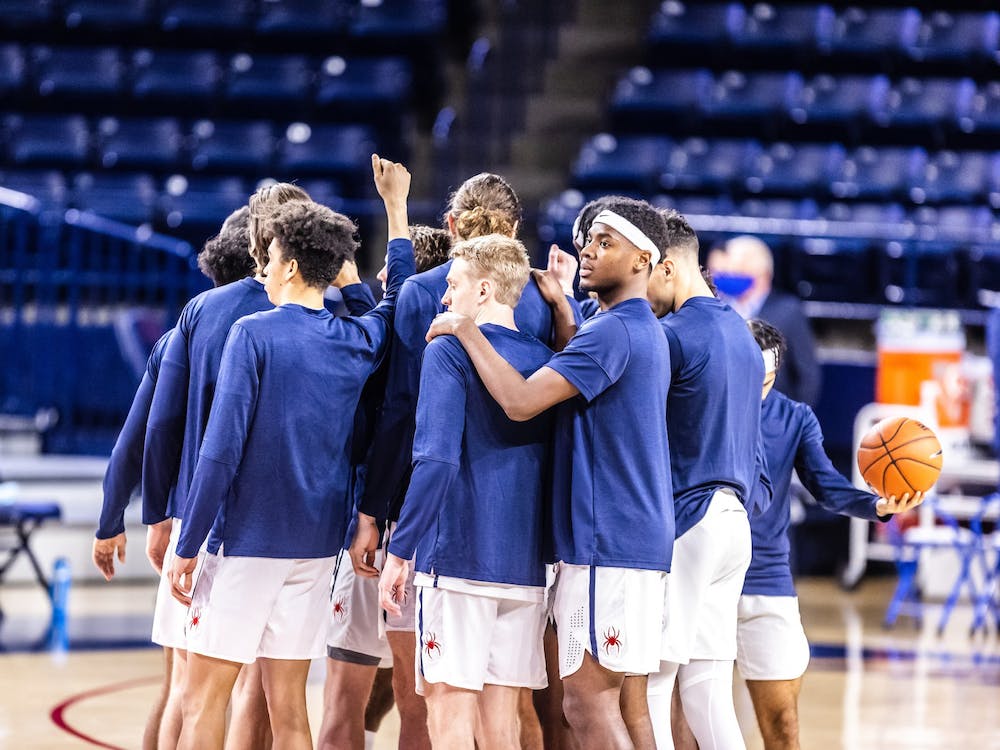