In the season opener against the Eagles, the return of fans to the E. Claiborne Robins Center gave the Spiders much-needed energy and jitters.

The Spiders fell to an early 14-point deficit with 3:04 left in the first half resulting from many missed shots from the field, especially three pointers where it shot 8.3% from beyond the arc.

“We just didn't make shots. We got open looks and what we wanted on offense,” graduate student forward Grant Golden said.

NC Central, on the other hand, shot 53.8% from three in the first half, led by senior guard Alex Caldwell who went four for four from the three. Caldwell finished with 17 points, leading the team, and shot 75% from the field.

The Spiders, however, did not dwell on their poor shooting. Graduate student guard Nick Sherod answered Caldwell’s final three of the half -- and what would be his final three of the game -- with one of his own with 2:04 left in the half, sparking a flame within the team. On the following possession, a smothering UR defense forced a shot clock violation, and the Spiders scored off of the turnover.

As the second half started with UR trailing NC Central 36-31, the energy in the Robins Center made the team come to life.  The Spiders kicked off the half with another run right off the bat. After making back-to-back field goals, junior forward Tyler Burton was fouled on a 3-point attempt and made all three free throws, giving UR a 41-40 lead at the 16:34 mark in the second half. This was only the Spiders’ second lead of the game since making the first point off of a free throw in the first half.

Burton, the 2021 Atlantic 10 Most Improved Player, got to the free-throw line seven times throughout the game and made them all, which helped him get a rhythm going for himself and the team. Burton finished with 14 points, second behind Golden with 19, and tied with graduate student starting guard Jacob Gilyard.

The Spiders forced 21 turnovers throughout the game, led by Gilyard, who tied his career high of seven steals in one game. Gilyard stayed in passing lanes and kept his hands up. His continuous swarming defense led him to the top of the NCAA with steals per game last year, averaging 3.5. Gilyard sparked the Spiders’ offense with his stellar defense, forcing the ball over and allowing UR to score 21 points in transition throughout the game. In the second half, the Spiders doubled the number of their first-half assists and had five assists on twelve made shots.

The dynamic duo, Gilyard and Golden, dominated the second half. Gilyard scored 10 second-half points and led the team in rebounds, assists, and steals at the end of the night. Golden led the team in points by converting countless contested baskets in the paint and scoring one clutch three pointer with 4:30 left in the game, pushing UR’s lead up to 13 points.

Coach Chris Mooney showed NC Central different defenses throughout the game, changing between a 2-3 zone and man to man, as well as putting out different lineups of players. This gave the Eagles a problem on offense, as their shooting percentage from three dropped to a mere 11.1% in the second half, making only one shot from beyond the arc.

UR closed out the game with a step back three by Jacob Gilyard as the second half drew to an end, giving the Spiders a comfortable 13-point lead with 2:41 left on the clock.

“I think it's a little different with our first five being bigger than the past,” Gilyard said regarding UR’s intense defense in the second half. “To get guys like Isaiah [Wilson] and Dji [Bailey] off the bench to have that energy, I think when we go to our bench and have certain lineups in, it is an advantage.”

The Spiders stayed composed throughout the game, unlike the fans, and were able to come out with their fourth consecutive season-opening win.

They look to carry the positive energy from the season opener into Friday's game in Annapolis at 6:00 p.m. against Utah State for the Veterans Classic. 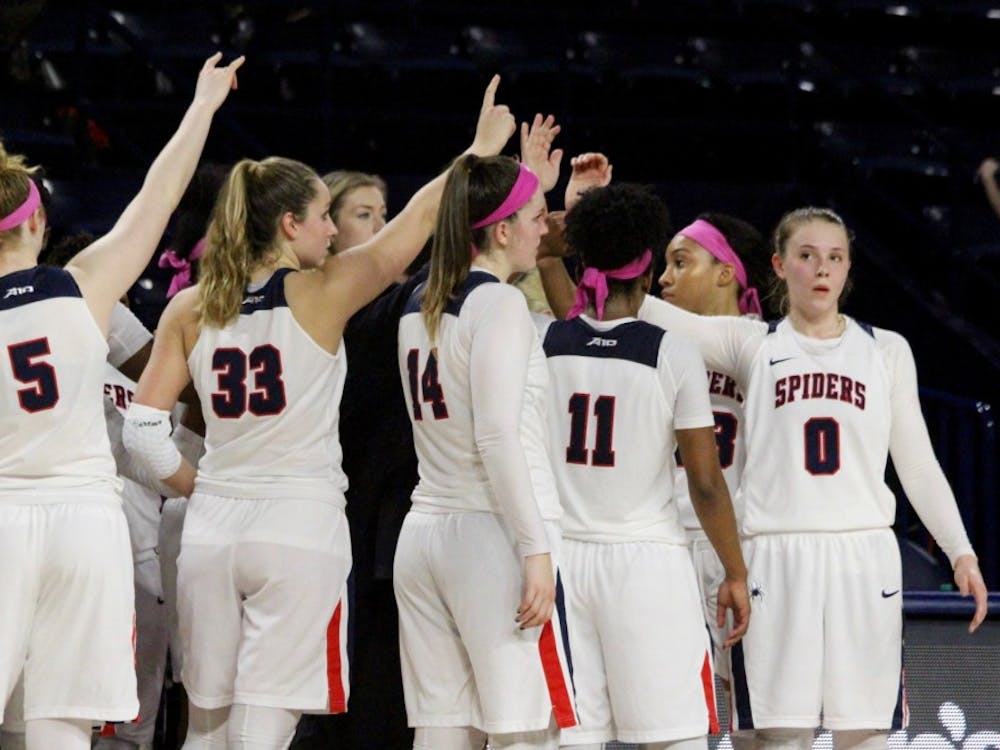