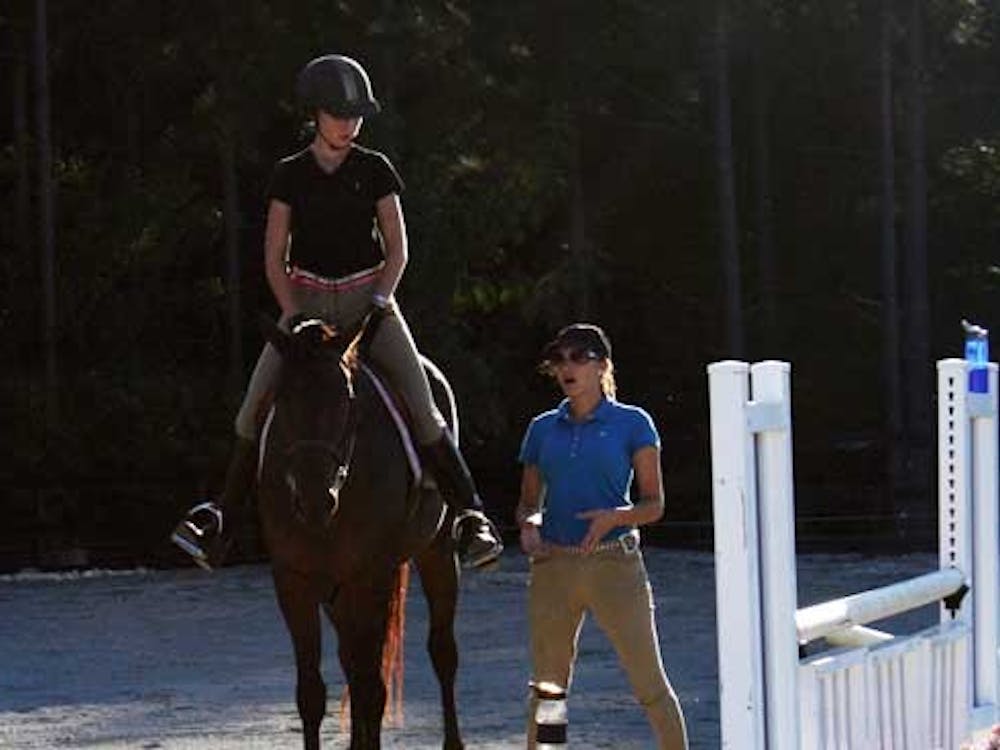 Equestrian team sets the bar high for the season

With the addition of 14 new riders this year, the women of the University of Richmond equestrian team are determined to qualify for the regional, zone and national championships in the spring. The 20-person roster is one of the largest that the team has seen since it formed 10 years ago at the university, said senior Caroline Elia, president of the equestrian team. "Last year, we moved from 10th place in the region to 6th place," Elia said. 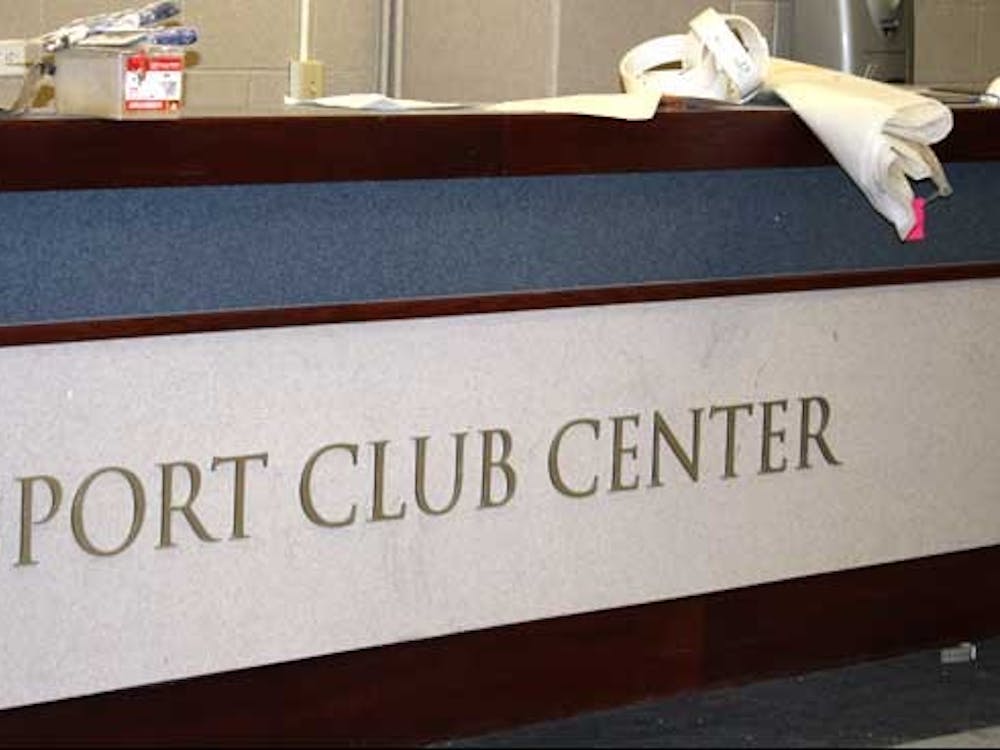 A new training room for sport-club athletes at the University of Richmond is under construction in the Weinstein Center for Recreation and Wellness and will be completed in April. Formerly a game room that housed pool tables and Dance Dance Revolution, the new training area will include a few offices, training tables, an ice machine, mailboxes and storage units and space to display sport-club memorabilia and photos, Tom Roberts, assistant vice president of recreation and wellness, said. Roberts said one of the main draws of the training room was having the necessary resources and a full-time athletic trainer available to sport-club athletes as a way to build the sport-club program. "When prospective students and families find out that we're giving more money to sport clubs, and when they walk back into that training room, that will seal the deal if they're on the fence," he said.

Wrestling was approved by a unanimous vote from the University of Richmond Sport Club Council on Tuesday to begin the process of becoming an official club sport. Austin Helm, RC '14, will be president of the new club, which will become legitimate at the end of next year after two semesters as a campus organization, according to school rules. "Wrestling club was here a little while back, but it kind of fell off, so I'm trying to get it going again," Helm said to the Council, which is composed of a president elected from each sports team on campus and run by an executive board of four students. Once a sport club is approved, it is able to receive Richmond funding designated for club equipment and travel, priority in scheduling for practice spaces and access to the sport club athletic trainer, according to school rules. Members of the council had originally worried about funding for the wrestling club because of the limited money and resources available.

First regatta is a success for team

Five boats from the University of Richmond club crew team competed in its first regatta of the season last Saturday at the College of William and Mary's inaugural 5-kilometer "Chick Chase" and one Richmond boat placed first. William and Mary hosted the race on the Chickahominy River which featured Richmond, James Madison University, Old Dominion University and Liberty University. Low temperatures and high winds made for a difficult day on the water, said Catesby Sanders, club president. 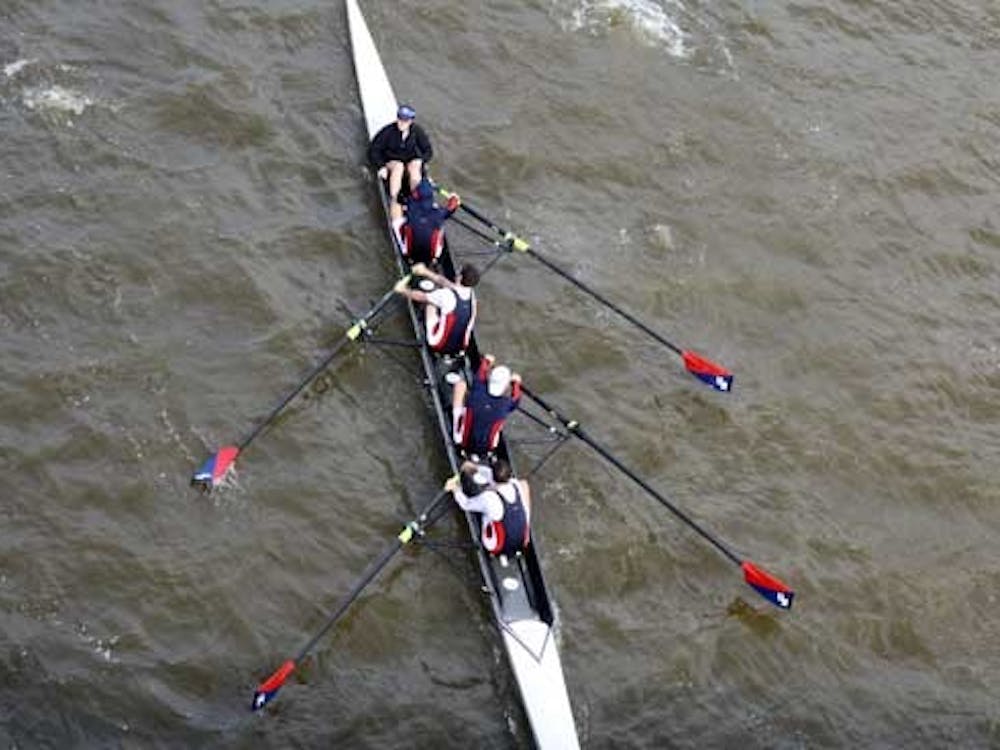 A club sports overhaul will allow the University of Richmond crew team to hire a part-time coach. Crew team president, Catesby Saunders, said that the women's club crew team had been on track to follow the men's club lacrosse team. 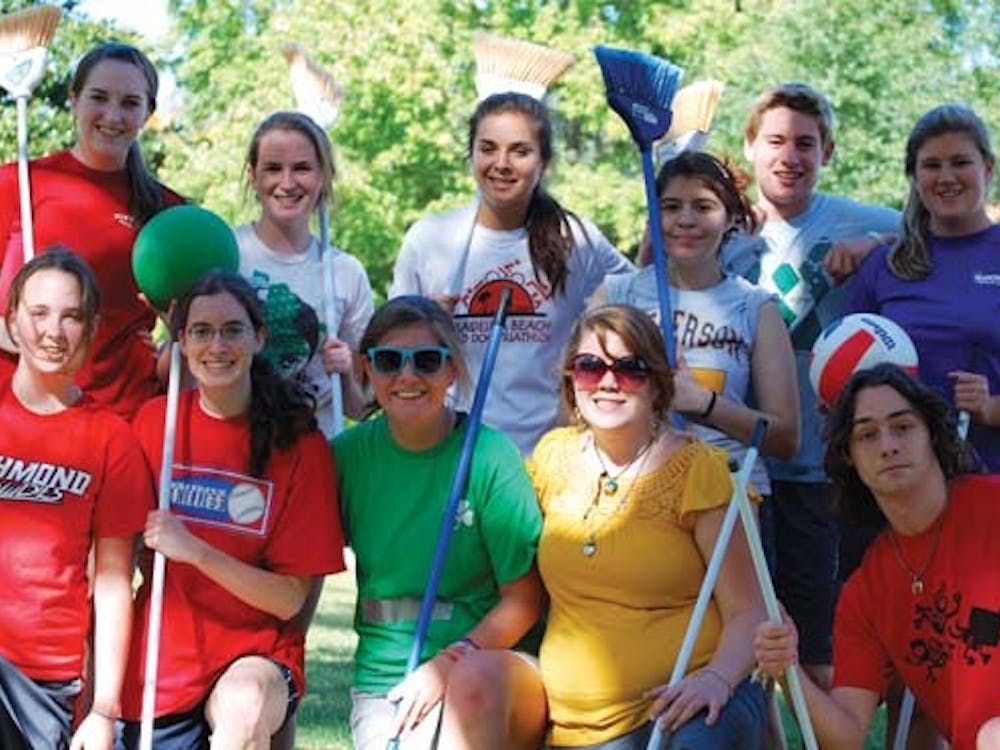 Video There's a new club on campus for every Harry Potter fan that's ever dreamed of catching the Golden Snitch. Twice a week, the 18 members of the UR Quidditch club meet on the Westhampton Green to practice the sport J.K. 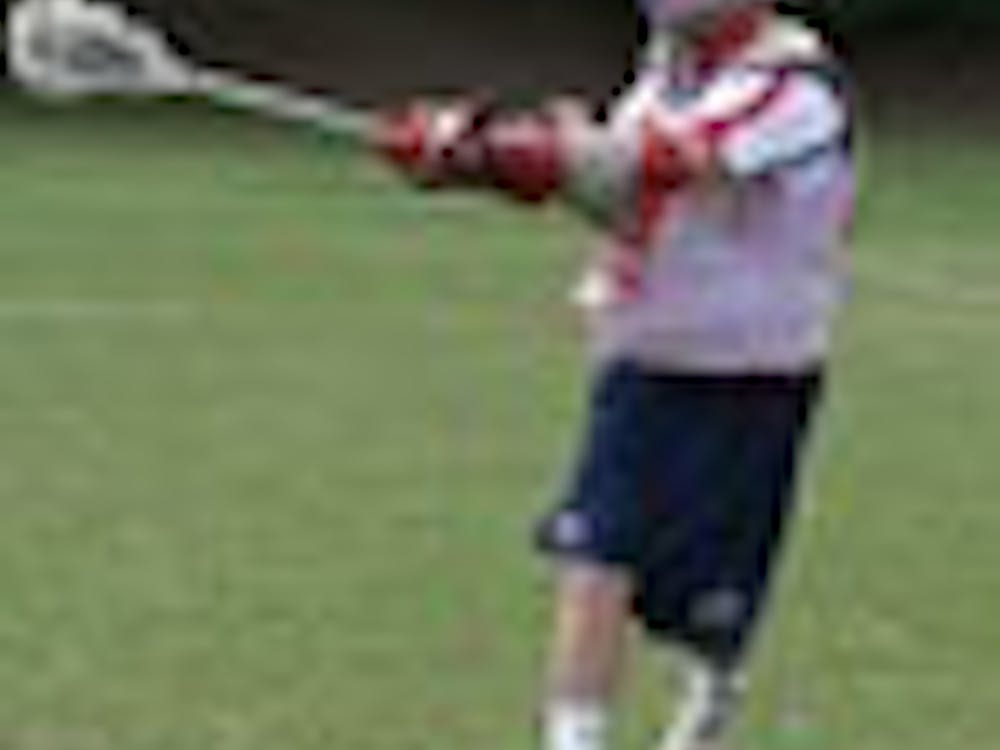 Men's lacrosse at the University of Richmond is changing from "a bunch of rag-tag frat boys" to a respectable team, club president Dan Colosimo said. The team aims to become a varsity club, meaning more money and better competition, said Tom Roberts, director of Recreation and Wellness.

"The best kept secret on campus." That's how Kerry McClung, manager of club sports at the University of Richmond, referred to club sports teams at the university. "But we're trying to change that so we won't be able to use that quote anymore," McClung said. McClung's dream will come closer to reality when club sports teams showcase themselves in the Forum at the first Club Sports Rush Day on Thursday, Sept. 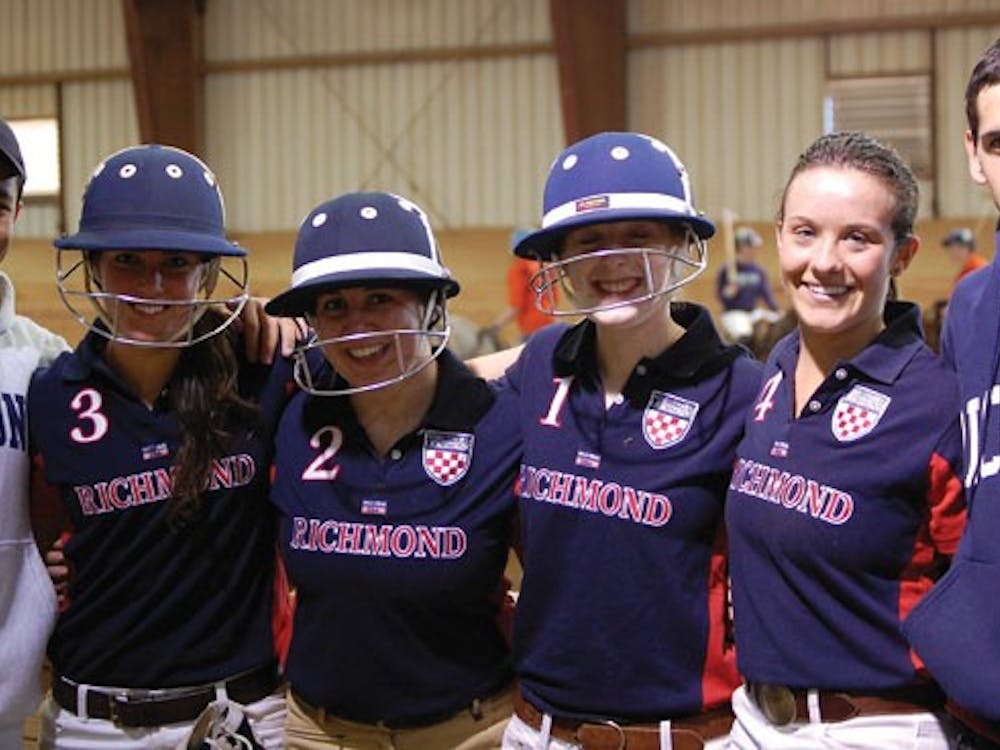 At the beginning of the academic year, nine University of Richmond students -- seven women and two men -- joined the newly formed polo club. Since then, they have had to learn the rules of the game from scratch, spend every Saturday traveling to Charlottesville, Va., for four- to five-hour practices and meet for weekly strategy planning sessions. "It's a game that is not for the faint of heart," said Lorenza Marcin, the polo club's faculty adviser. And although the team lost during its first tournament of the season last Saturday, sophomore Bailey Smith, polo club president, was not deterred. "It was a great experience," Smith said of the first match. 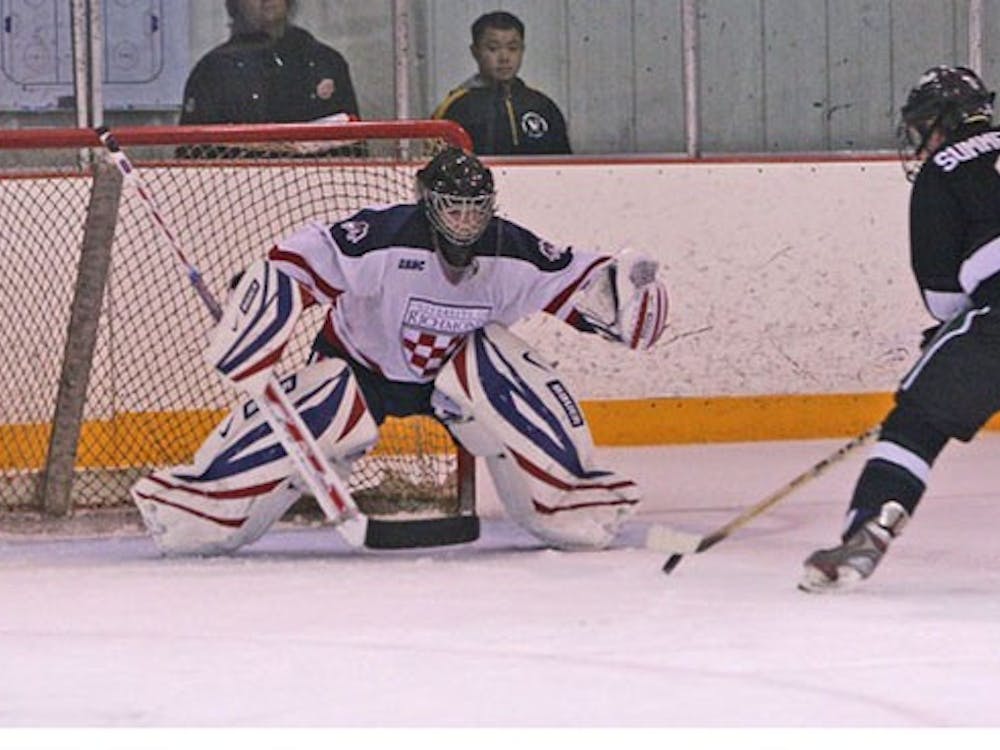 With the football team winning the school's first athletic national championship and the school weathering bad press for low turnout at basketball games, it has been easy for other athletic teams at the University of Richmond to fly under the radar. The Richmond men's club ice hockey team is one example. Founded in 2001, the team has been one of the most successful club teams at Richmond, winning four conference championships and four regular season championships. "We're a club team, but it takes a lot of time and effort," head coach Kevin Silver said.