Pick up any newspaper this time of year, and I'll bet 80 percent of the articles in the sports section are football-related, covering every aspect of the sport from the NFL to high school. 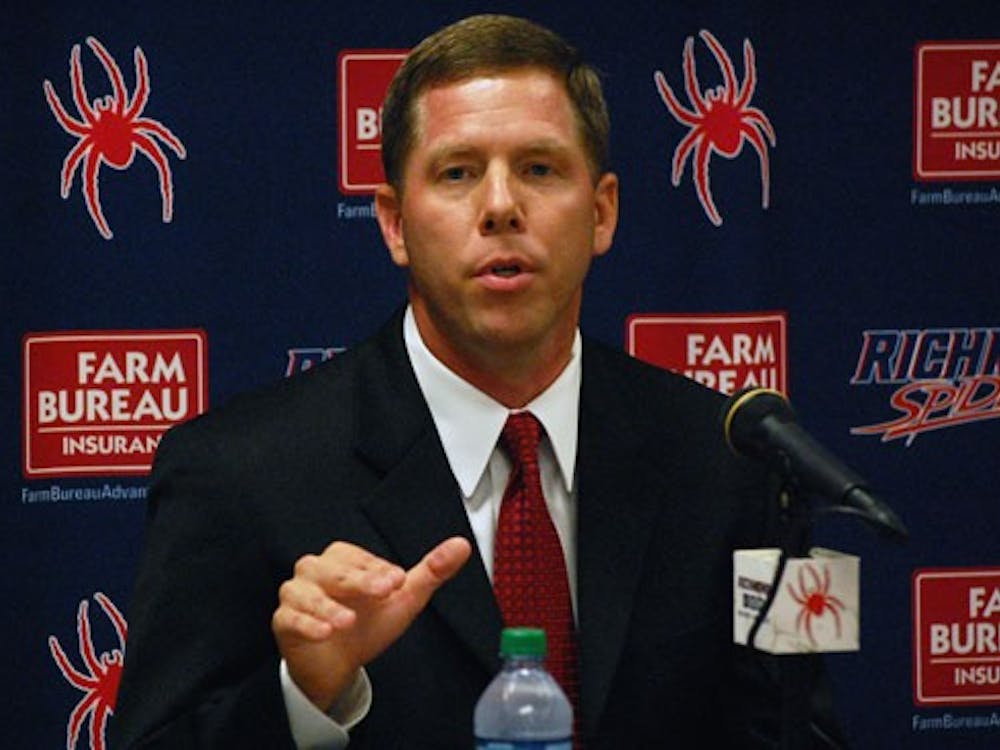 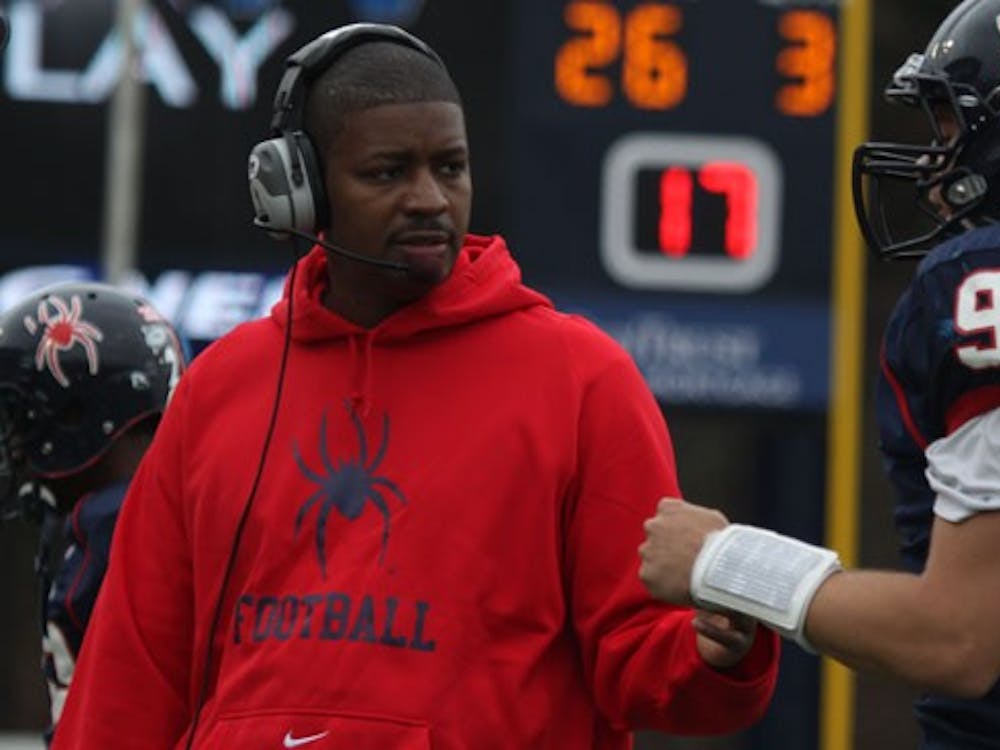 University of Richmond football coach Latrell Scott has resigned from his position Tuesday afternoon, leaving the Spiders without a permanent coach 10 days before the team's season opener.

The small group of fans that gathered around the Lower Grass Practice Field to watch the University of Richmond's football team's final open-to-the-public scrimmage saw a familiar sight: The Spider defense exerting its dominance. The defense dressed in white practice jerseys, while the offense sported red ones.

On April 30, 2011, former University of Richmond cornerback Justin Rogers was selected by the Buffalo Bills in the seventh round of the NFL Draft. However, on March 11, 2011, the National Football League entered a lockout, disallowing communication between the organizations and the players. While numerous other former Spiders, such as Lawrence Sidbury (2009, 4th round, Falcons) and Tim Hightower (2008, 5th round, Cardinals), have heard their names called on NFL draft day, Rogers's situation is unique. Due to the lockout, Rogers has been forced to delay his transformation from a collegiate to professional player. "I haven't spoke to [the Bills' organization] since the draft cause I can't with the lockout still being on," Rogers said by phone.

University of Richmond cornerback Justin Rogers was taken in the seventh round by the Buffalo Bills in the 2011 NFL Draft Saturday.

Spider Justin Rogers drafted in 7th Round of NFL Draft

Former University of Richmond cornerback Justin Rogers was drafted in the seventh round of the National Football League Draft Saturday. Picked 206th overall by the Buffalo Bills, Rogers is the first Spider football player drafted since defensive end Lawrence Sidbury in the 2009 Draft. Rogers finished as the Colonial Athletic Association's all-time leader in kickoff return yards and ended his career with 12 total interceptions, three of them returned for touchdown. Rogers is joined in the draft pool by fellow Spiders: Martin Parker, Kevin Grayson and Eric McBride. 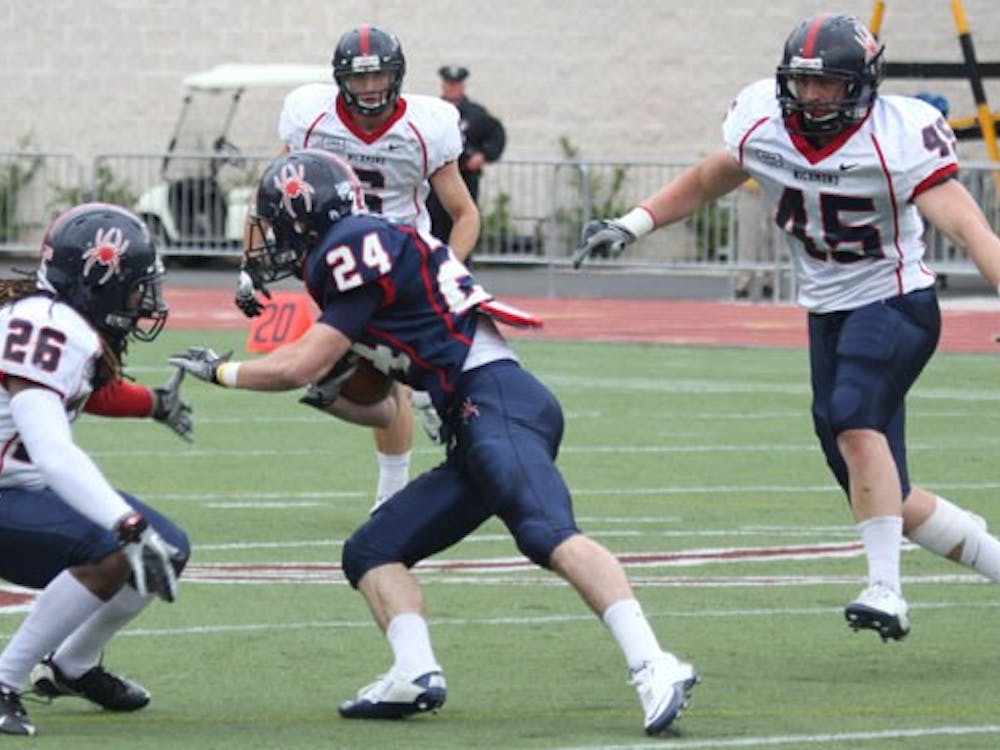 The University of Richmond football team held its annual Spring Football Game Saturday afternoon at Robins Stadium to bring an end to its spring practice.

University of Richmond graduates and former football players Justin Rogers and Martin Parker, have been preparing for the NFL draft, which will take place April 28 to April 30 in New York City. Parker, a defensive lineman, said the best outcome would be to hear his name called on TV. "It really doesn't really matter what I wear," he said.

Spring: A season of changes for Richmond football

The University of Richmond's football team is rebounding from a season that ended earlier than the team planned. "We make it a goal with the team not to spend Thanksgiving with our families," head coach Latrell Scott said, referring to the team's post-season expectations to make it into the playoffs. 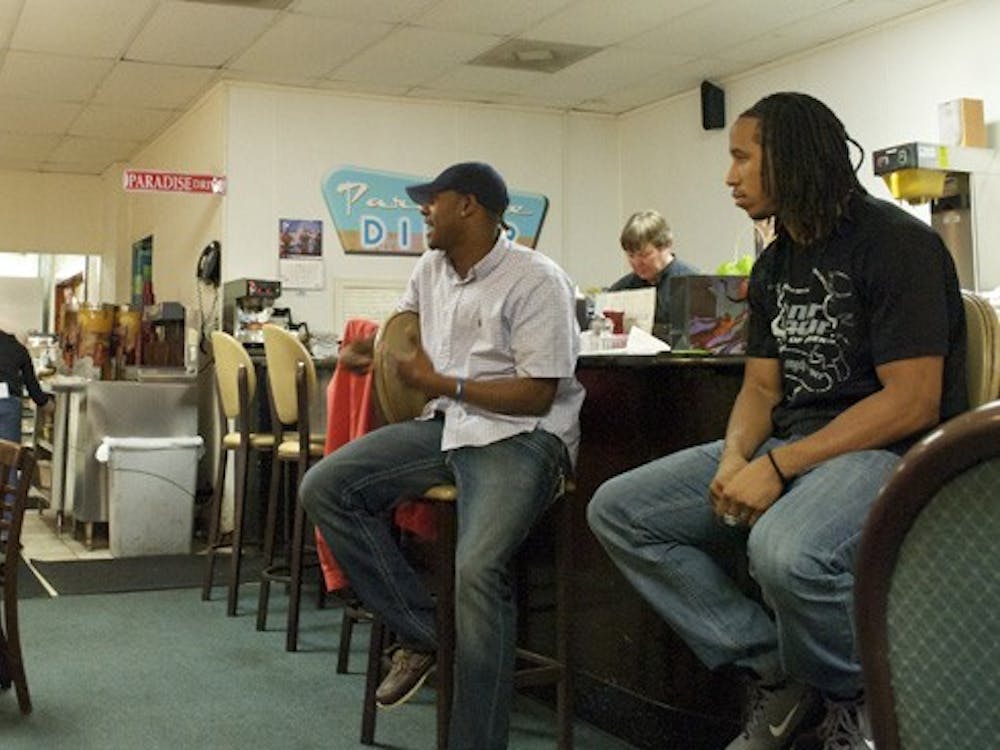 On Tuesday night, University of Richmond football player Donte Boston and former teammate Kevin Grayson, RC '10, spoke to 22 players and the coaching staff from the George Wythe High School basketball program at a team dinner about the importance of academics. Boston, who was suspended indefinitely Wednesday for violating team rules, said he knew of the possible suspension before speaking with the basketball players, but decided to do it anyway.

The following 17 men are the newest members of the University of Richmond football team. Each quote is from head coach Latrell Scott. Cormac Craigie QB Fr.

The South will rise again

The South is football country. Sure, Penn State, Ohio State, Notre Dame and the University of Southern California are programs storied in success and tradition, but let's get real, y'all: The South wins the 2011 recruiting battle, especially (and I hate to say it as a Florida Gators fan) the REAL USC -- the University of South Carolina. Jadeveon Clowney, the No.

Representatives from the athletic department at the University of Richmond plan to move the student fan section of the Robins Stadium to the opposite end zone and change the game day atmosphere in the process. After evaluating turnouts from the first season of on-campus football games, the biggest change to be implemented was the location and size of student seating, said Jana Ross, assistant athletic director for marketing and fan development. 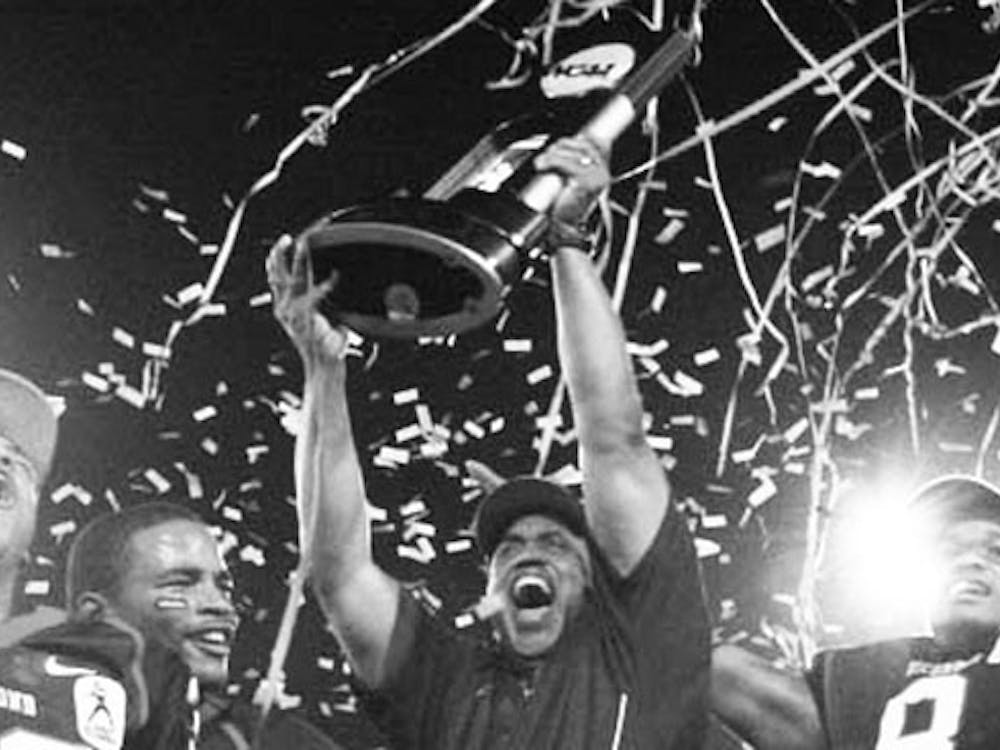 Once as much a part of Richmond Spider football Saturday afternoons as any player, one of the most avid supporters of the football team is ready to exchange his megaphone and Spiderman shirt for a notebook and computer. Mike Radford, RC '78, attended Richmond football games during the time his two sons -- Brian and Christopher -- played for the school.

Richmond football brings in 17 players for the 2011 season

For head football coach Latrell Scott, this year's 17-member recruiting class was all about filling needs, he said. After last year's season was plagued with injuries, Scott set out to find versatile athletes that were playing more than one position for their high school team, he said. One of the biggest needs that Scott wanted to fill was the offensive and defensive line, he said. 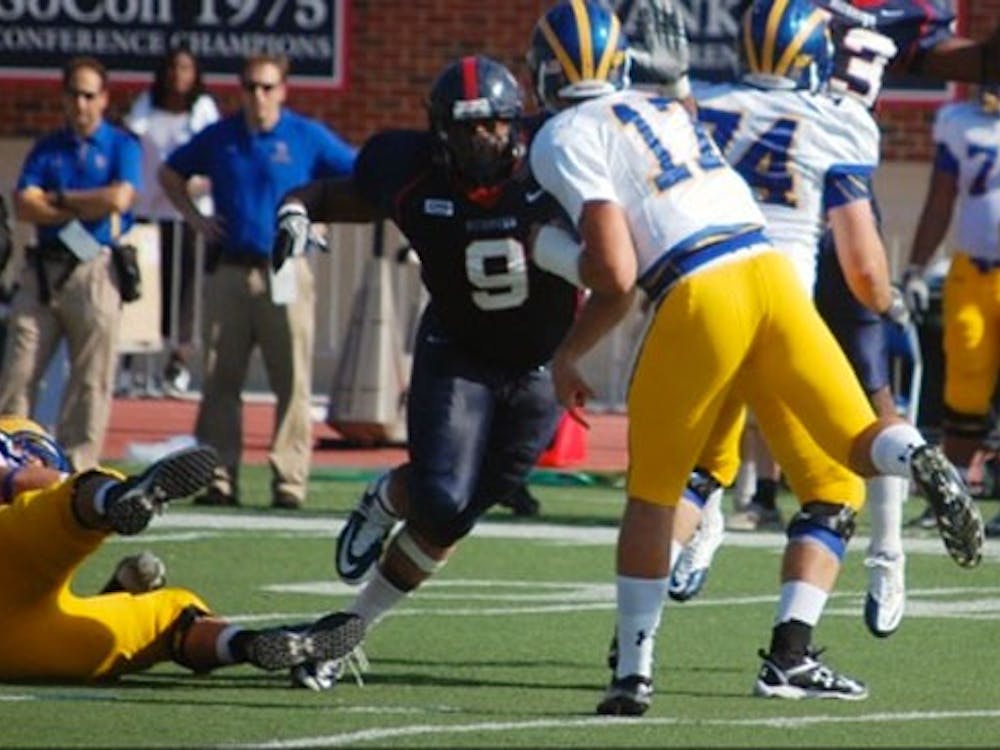 Former University of Richmond defensive tackle Martin Parker was named the defensive Most Valuable Player of Saturday afternoon's East vs.

Former University of Richmond football players Martin Parker and Justin Rogers will head to the NFL Scouting Combine next month after their appearance in the East vs. 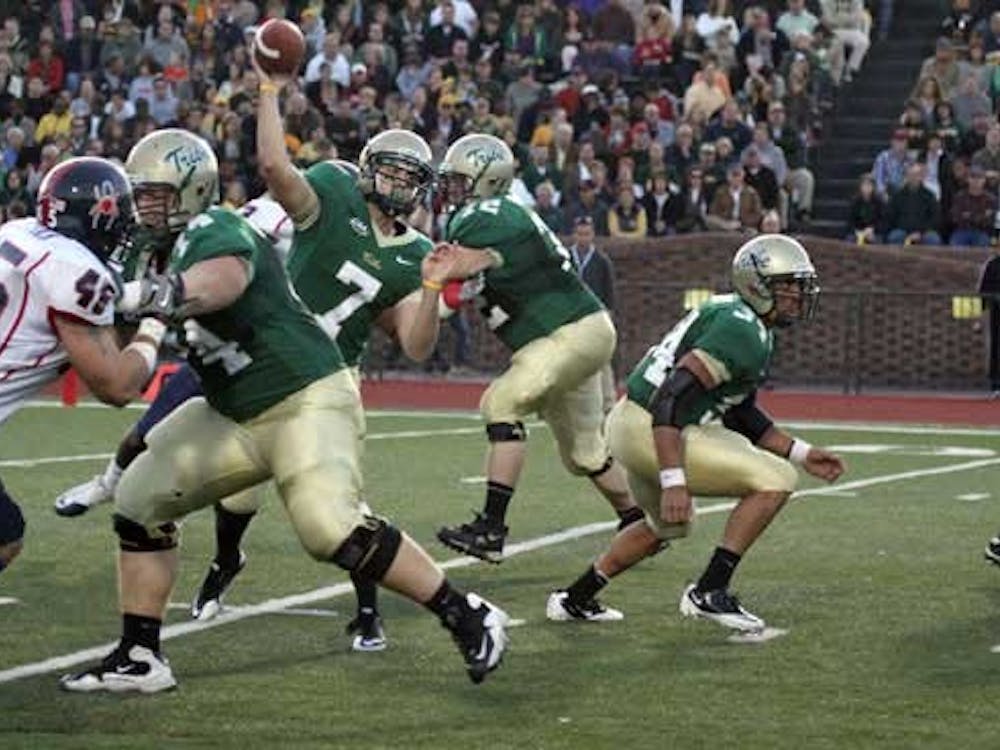 WILLIAMSBURG, Va. ? For the first time since 2006, there won't be any playoff football in Richmond this year. Needing a win against the College of William & Mary to keep its playoff chances alive, the University of Richmond instead lost, 41-3, Saturday evening in Williamsburg, Va. "Well obviously it didn't turn out the way we expected it to," Richmond coach Latrell Scott said.