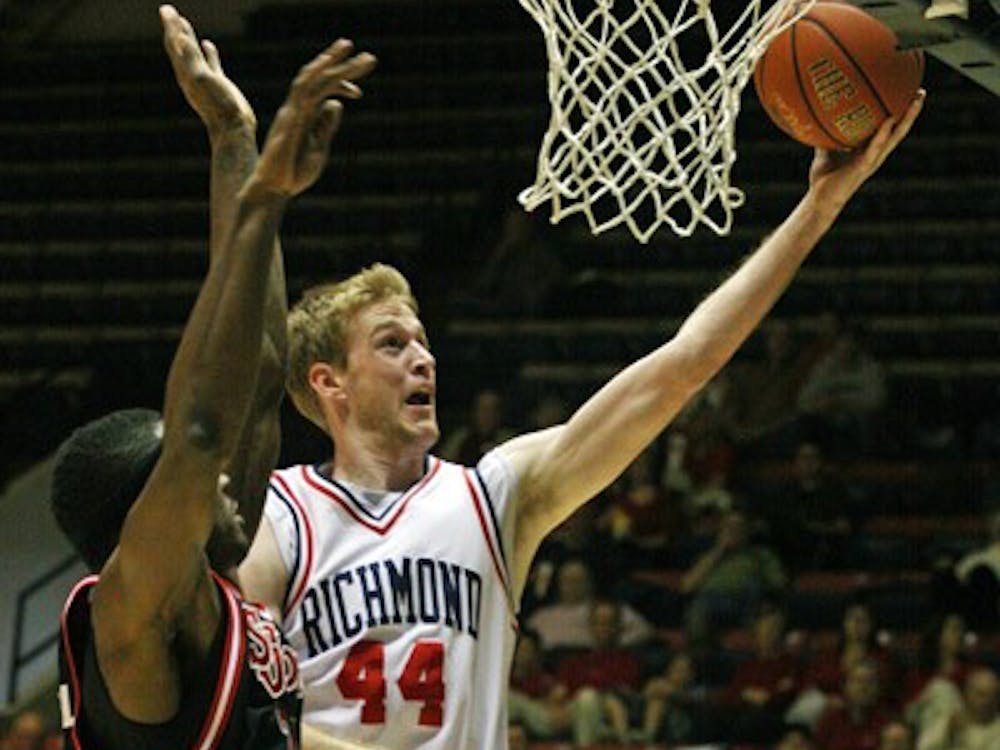 The men's basketball team defeated St. John's University 75-69 in the first round of the College Basketball Invitational on Wednesday night at the Robins Center. 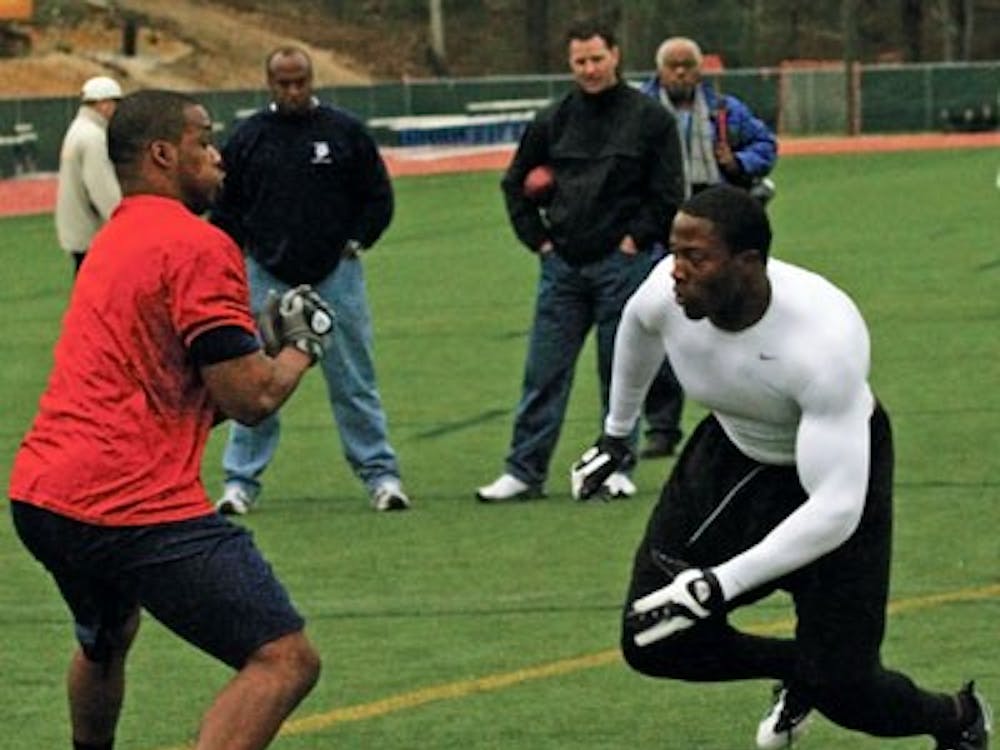 Several University of Richmond football players participated in field drills and worked out before of NFL scouts and position coaches Thursday at First Market Stadium. 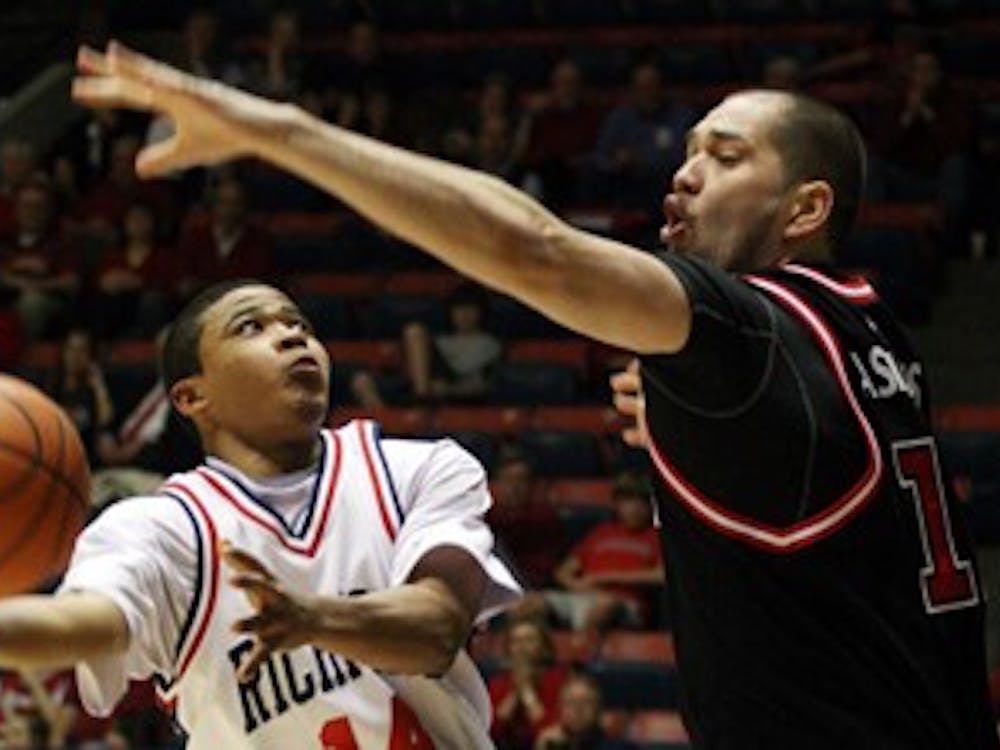 Richmond advances to the second round of the CBI

When the University of Richmond men's basketball team needed a big shot, it was senior Jarhon Giddings who delivered. It was Giddings' three-pointer from the corner that broke a 61-61 tie and gave Richmond the lead for good as the Spiders defeated St.

Richmond to host St. John's in first round of CBI Tournament

Sophomore guard Kevin Anderson knows the perils of going up against a basketball team in the Big East -- the first conference to get three No.

Richmond falls short of A-10 title and automatic NCAA bid

The run for the Atlantic 10 Conference title and an automatic bid to the NCAA Tournament for the University of Richmond women's basketball team fell just short after the team lost to the University of Charlotte 59-54 in Charlotte, N.C., on Saturday. Richmond was looking for its first ever A-10 title.

The University of Richmond baseball team lost its first game of the season to Seton Hall University 14-12 on Saturday at Pitt Field, after a week of canceled games due to an early March snowstorm. Richmond's pitchers began faltering in the second inning.

The University of Richmond men's basketball team upset No. 17 Xavier University 80-75 on Saturday night at the Robins Center, expelling the memory of painful late-game losses from earlier during the season. Sophomore Kevin Anderson, at 6 feet stood anywhere from six to nine inches shorter than his defenders. 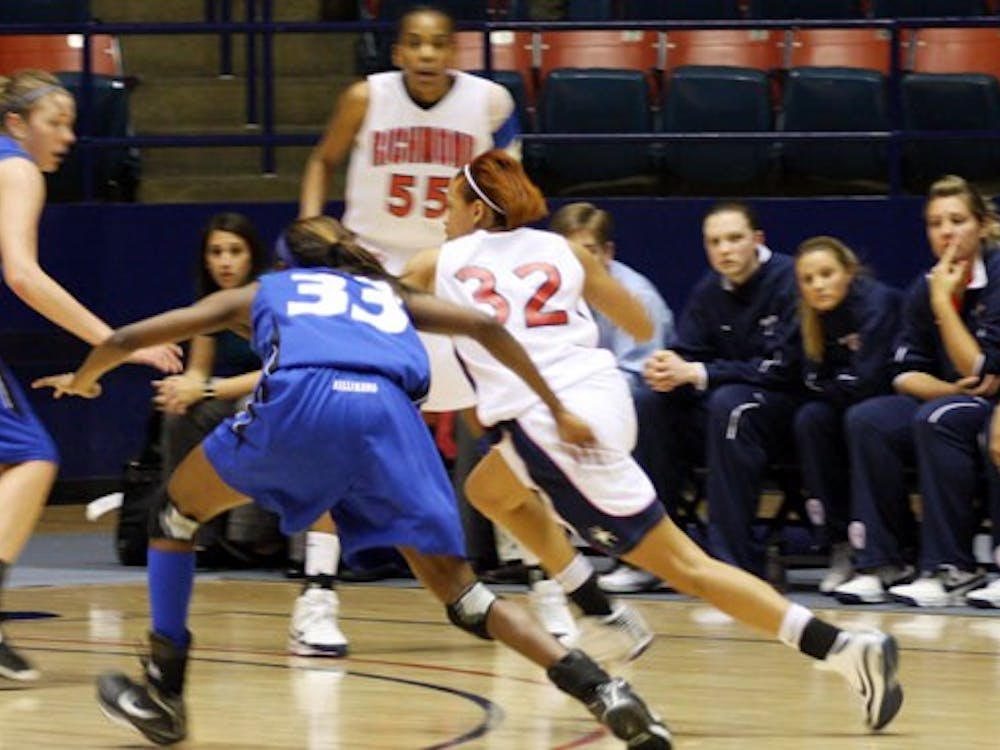 Women's basketball prepares for A-10 tourney

After earning a first-round bye, the University of Richmond women's basketball team will begin the Atlantic 10 tournament in the quarterfinals at 2:30 p.m.

Sometimes you'll listen to a song and hear lyrics that describe your exact thoughts, even better than you could have yourself. This often happens to me, and the same applies to what I read in books and watch in movies. 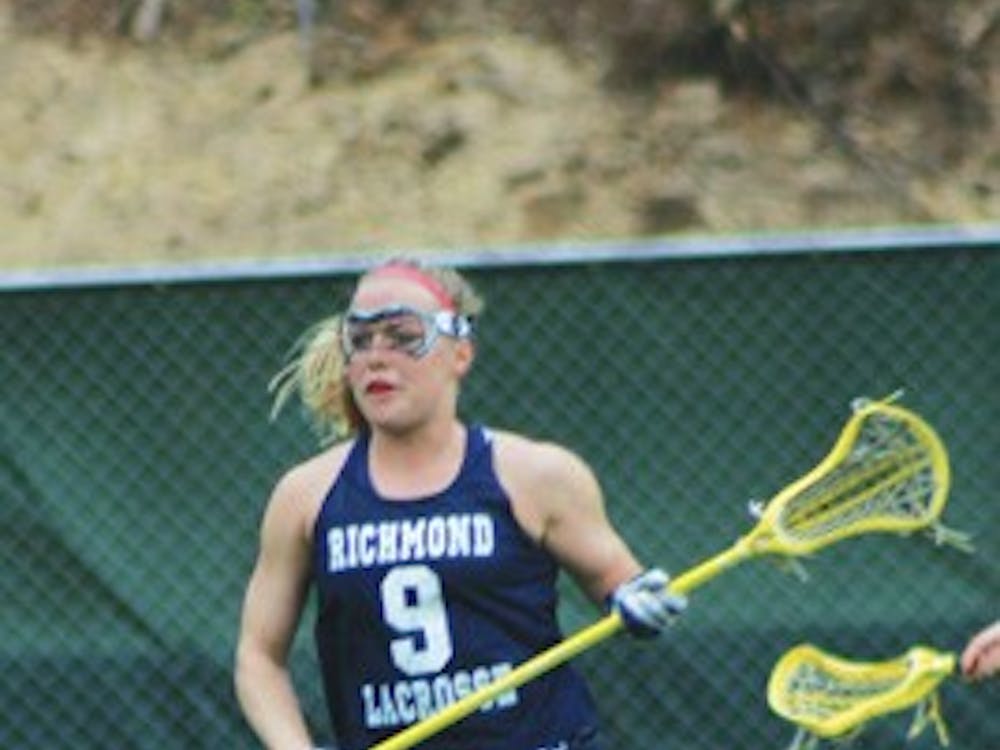 Senior lacrosse captain Mandy Friend enters her final season at the University of Richmond having already broken and re-broken program records during all of her previous three seasons. Friend, a native of Canandaigua, N.Y., joined the Spiders during the 2005-06 season, teaming up with older sister Ashley to help lead the Spiders to their second-straight Atlantic 10 Championship and NCAA appearance. Fifty-three goals, 23 assists and 76 points later, Friend had made sure the team had achieved its objective during her first year on the team. After setting a program record for the most points scored during a single season and earning five A-10 Rookie of the week honors, individual awards followed. Friend was named a Third-Team All-American, Rookie All-American and All-Regional first team honoree as well as being selected to the Virginia Sports Information Directors' first team. She was also named to the A-10 Championship team, the A-10 All-Conference team and was named A-10 Rookie of the year for 2006. Friend attributed her success to the lack of an overwhelming expectation to perform well on an established team. "I had stand-out upperclassmen who could take over a game," Friend said, "and I felt like I was just helping them out, and if I played well, I played well and that was that." With that type of mindset, Friend said she had the ability to play her best lacrosse. After such a remarkable year, Friend said she had begun to pressure herself to "do this or do that." But she repeated her success, and then some. As a sophomore in 2007, Friend set new program records for the most goals, 62, and points in a season, 77.

The University of Richmond baseball team had another perfect weekend at home, with two wins moving its record to 7-0. The Spiders' junior starter Ian Marshall pitched seven shutout innings during Richmond's 27-2 win against the Iona College Gaels at Pitt Field on Friday. "It was one of those days when everything seemed to be going right," coach Mike McQueen said. During Marshall's last outing against Niagara University, he ran up the pitch count early. 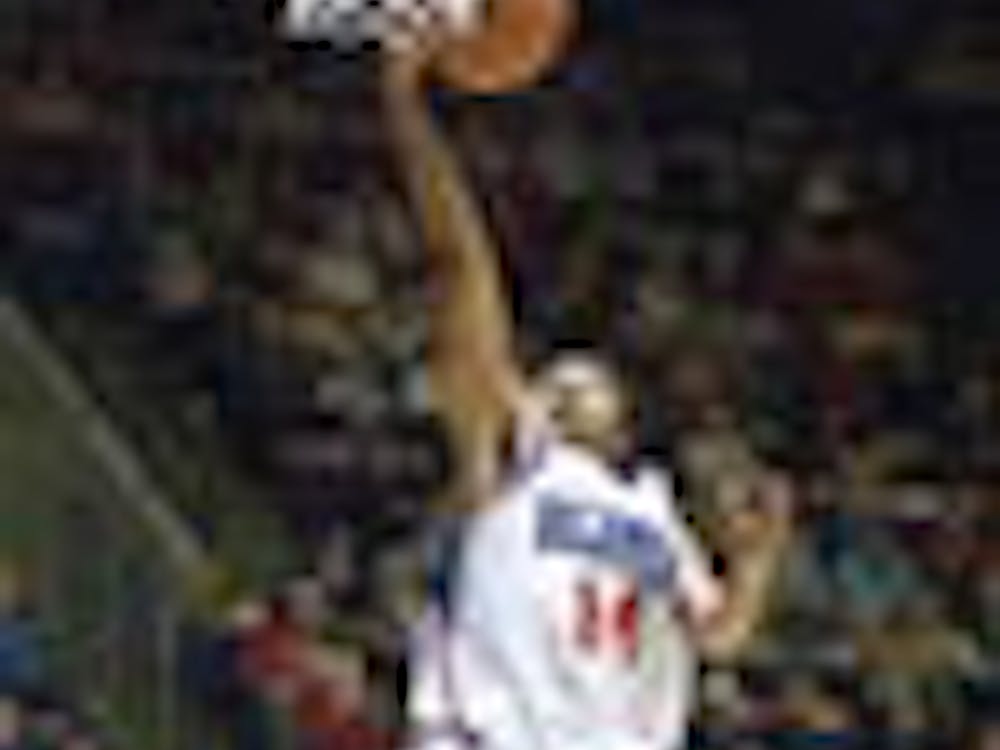 University of Richmond students and the Richmond community have recently been criticized for not attending home basketball games, but a win against nationally ranked Xavier University on March 7 might sway students to put their work aside during spring break and support the team during the first round of the Atlantic 10 tournament in Atlantic City, N.J., on March 11. Of the 14 teams in the Atlantic 10 conference, the top 12 teams advance to the tournament in Atlantic City -- a neutral site.

University of Richmond senior Johanna McKnight made sure her Senior Night would be special. McKnight scored the first six points of the game and ended with a season-high 19, adding 10 rebounds in her final game at the Robins Center to help lead the University of Richmond women's basketball team to a win over Saint Louis University on Sunday afternoon. "I was talking to my teammates and they said 'your first game you had a double-double and now your last game you got a double-double,'" McKnight said. 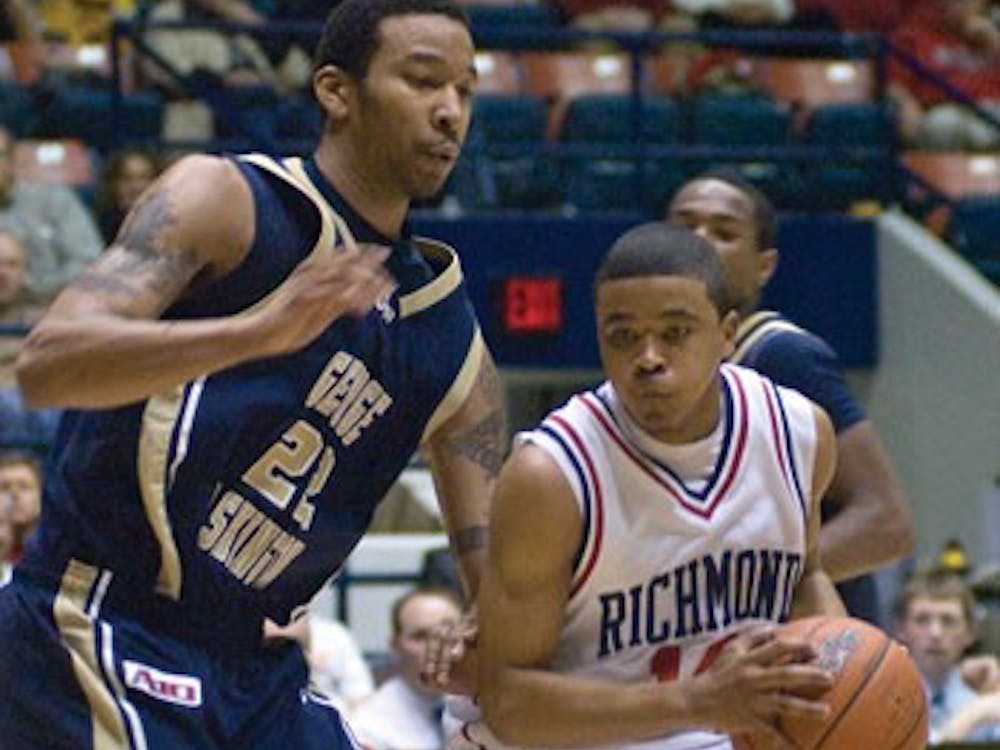 On paper, it was the perfect recipe for a University of Richmond men's basketball win: at home, on Senior Night, versus one of the Atlantic 10's worst teams -- a team that the Spiders had already beaten earlier this season. But all of those facts meant nothing after the opening tip-off as the Spiders fell 66-57 to George Washington University Saturday night at the Robins Center. "Their defense was much more aggressive" than in the first meeting, Richmond coach Chris Mooney said. 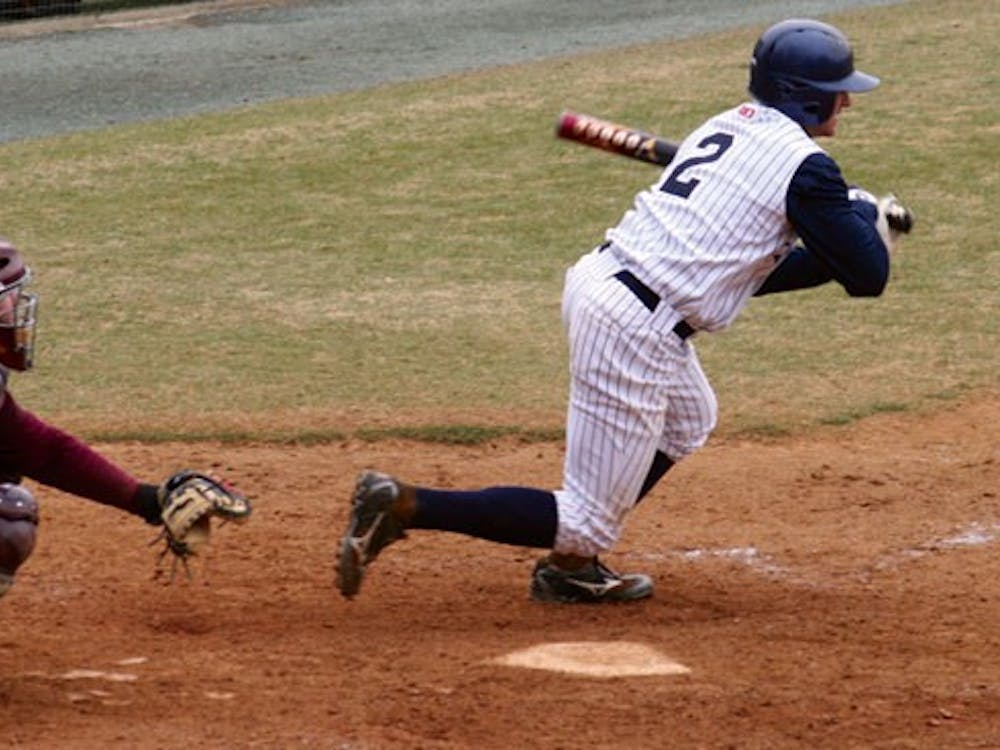 The Spiders put on another offensive show Saturday morning, defeating the Iona College Gaels 15-4 at Pitt Field, led by senior captain Ryan Metzroth, who hit his team-leading third home run. During Friday's game, the Spiders dominated The Gaels from the outset, but Saturday morning brought a different Iona club. 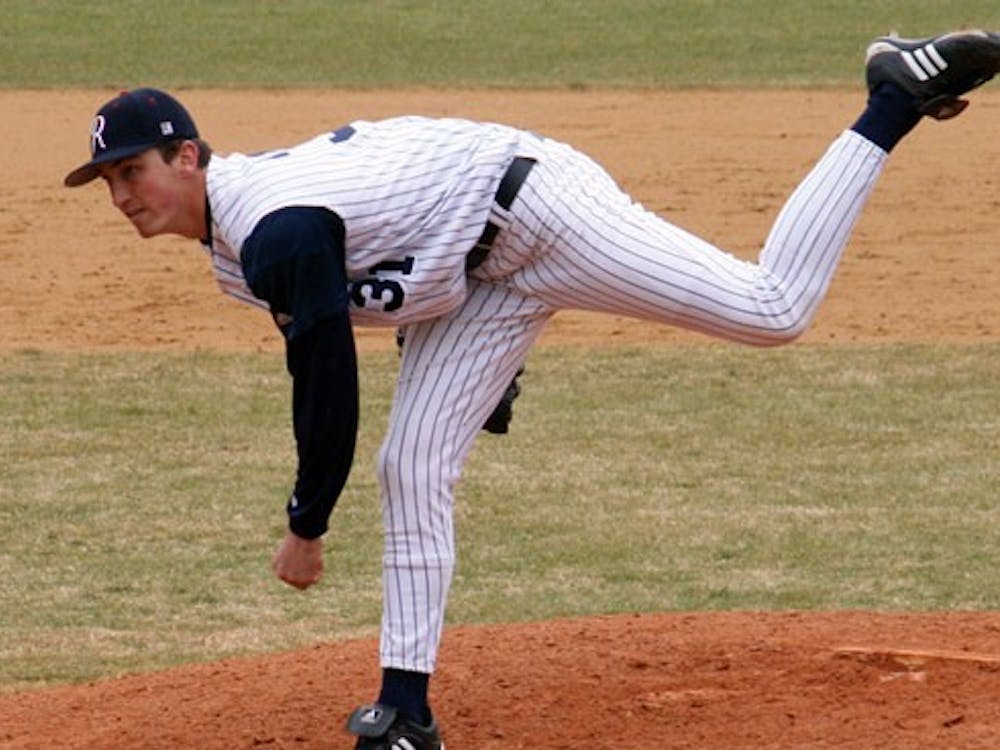 Spider junior starter Ian Marshall pitched seven shutout innings during Richmond's 27-2 trouncing of the Iona College Gaels at Pitt Field Friday afternoon, moving the baseball team's record to 6-0. "It was one of those days when everything seemed to be going right," coach Mike McQueen said. During Marshall's last outing against Niagara University, he ran up the pitch count early.

On Friday, my younger sister heard the news she'd been anxiously waiting to hear since October: Brian Roberts is staying in Baltimore. Every day, she checks masnsports.com and The Baltimore Sun to check the latest news, fearful that this year might be Roberts' last with the Baltimore Orioles.